The Philadelphia Phillies (53-48) edged out the host Detroit Tigers (30-66) by a 3-2 score in 15 often frustrating innings on Tuesday night at Comerica Park.

The victory, which came in a game that began nearly 40 minutes late due to rain and ended six innings late due to the failure of both offenses to produce with runners in scoring position, was the Phillies fourth in five games. It also moves them to five games over the .500 mark for the first time since July 2.
The Phillies had a couple of chances to put some distance between themselves and Detroit in regulation play, the first coming in the very first inning when Rhys Hoskins singled and Bryce Harper doubled with one out. Both would end up stranded.
In the home 1st inning, rookie Tigers second baseman Harold Castro reached on an error by Scott Kingery, who continues to be played out of position by the Phillies on a nightly basis, this time at shortstop. Nola than hit Miguel Cabrera with a pitch. Castro moved to third on a ground out, and then raced home to score the game’s first run when Nola bounced a wild pitch in the dirt that J.T. Realmuto couldn’t block.
In the top of the 2nd, the Phillies went on top via an unlikely source. Roman Quinn powered up, blasting his first home run of the season out deep to left field, a two-run shot to put the Phillies up by a 2-1 score.

Phillies Nation@PhilliesNation
Phillies take a 2-1 lead on this rocket off the bat of Roman Quinn, his first homer of the season. 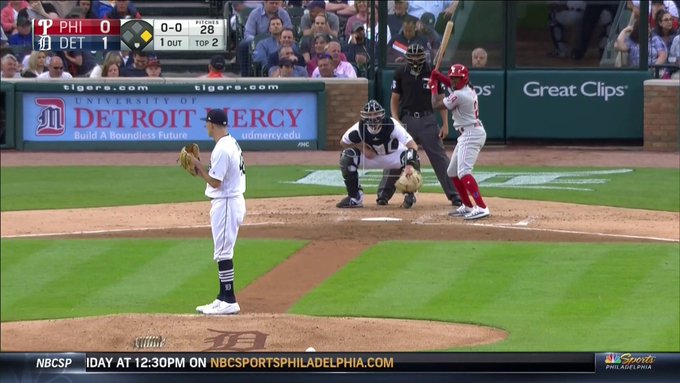 See Phillies Nation’s other Tweets
That score remained into the 6th inning when, in a nod back to that 1st inning, the Phillies blew a huge opportunity only to see the Tigers score. In their half, the Phillies put the first two runners on, and had the bases loaded with one out. But Adam Haseley and Quinn each popped out to end the threat.
In their half of the inning, the Tigers tied it up. Castro led off with a double and came around with the tying run when Nicholas Castellanos doubled one out later.
That was all the scoring in regulation play. Phillies starting pitcher Aaron Nola would go 7 strong innings, and Tigers starter Matthew Boyd pitched around all the trouble over 6 innings as numerous scouts watched the trade deadline target from the stands.
Both bullpens then did a fantastic job. None was more effective than former Phillies starting rotation member Nick Pivetta. He came on with one out in the bottom of the 8th inning and tossed 3.2 hitless shutout innings, walking one and striking out five batters.
Both teams blew opportunities to win it, and it took a great defensive play to keep the Tigers from walking it off in the bottom of the 14th. Castellanos led off with a double. After a strikeout and intentional walk, pinch-hitter Brandon Dixon rolled a base hit to left field.
Castellanos came racing home with appeared to be the winning run. But Brad Miller, who had entered the game as a defensive sub in left field in the 12th inning for Nick Williams (who himself had been pinch-hit for by Jean Segura), fielded the ball and came up firing. Realmuto snared the ball on the first base side of home plate, and dove back to apply the tag to the sliding Castellanos for the second out. Alvarez then struck out John Hicks, and the Phillies went to the 15th inning for the first time this year.
The Phillies finally pushed the key run across in the top of the 15th inning. Scott Kingery started it off by slashing a triple into the right field corner. When Rhys Hoskins followed by slinging an inside-out base hit to right field, the Phillies finally had the lead at 3-2.
In the bottom of the 15th, Jose Alvarez tossed a second shutout frame to earn the victory. The Phillies bullpen ended up tossing eight innings, allowing three hits and walking three batters. Now the two teams will get a short night sleep, with the series finale set for a first pitch just under 13 hours from the time this one ended.

The biggest hit of the game may have actually been Scott Kingery‘s triple to lead of the top of the 15th inning. That put someone in scoring position for Hoskins to drive in for what proved to be the game-winning run. But Kingery was 0-6 with four strikeouts prior to that.
Another player who has to be mentioned is Pivetta, who went 3.2 scoreless innings. He allowed no hits, walked one, struck out 5 batters. Then there was Brad Miller with his great throw. And J.T. Realmuto with a fantastic tag on that play. Jose Alvarez got the ‘W’ with two shutout frames.
But it was Hoskins who came through in the clutch when so many had failed in that situation for a long time in this game. His RBI single ended up the winner, and the Phillies first baseman had two hits and two walks while batting out of the two-hole in the lineup.

Originally published at Phillies Nation as “Phillies get key defense in 14th, key hits in 15th to down Tigers by 3-2″