Hunter Pence has refreshed his career at home in Texas

The majority of chatter and rumor involving the Philadelphia Phillies as the 2019 trade deadline approaches has revolved around pitching, and for good reason. The Phillies are probably going to need to find a pair of new starting pitchers in order to remain in contention for a postseason spot this year, and that remains the case after the signing of lefty Drew Smyly.

However, there is no doubt that the club could also use better options coming off their bench. There are a pair of hitters rumored to be available who could help bolster those bench options for manager Gabe Kapler.
One of those is a name and face familiar to many Phillies fans, corner outfielder Hunter Pence. After completely reworking his swing and rededicating himself to a new training regimen, Pence stunned many across baseball by emerging as an AL All-Star this season at age 36.
Pence, who plays for the Texas Rangers, is now the subject of a new documentary “The Pence Method“, which will air for the first time tonight (Saturday) on FS1 at 9;00 PM.
Jeff Wilson for the Fort Worth Star-Telegram interviewed Pence recently, and quoted him on how it felt to know that teams were interested once they learned of the changes he was making.
“There was a lot of doubt. I lost my job. I wasn’t playing every day, and it hits your confidence. I wasn’t necessarily doing great right away. It took a lot of failing to really learn the swing change. When you’re going through that process, and when I heard that at the winter meetings at lot of general managers were interested, it was tears of joy. I felt super grateful and honored. It was like a light at the end of the tunnel.”
Pence, who has earned more than $120 million over a 12-year big-league career which included a stop in Philadelphia from July 2011 through July 2012, would eventually accept a $2 million dollar, one-year deal with the Rangers. He has far outperformed that contract.
Over 58 games and 228 plate appearances, Pence is slashing .291/.351/.587 with 15  home runs, 30 extra-base hits, 48 RBIs and 45 runs scored. He has an outstanding .938 OPS, and while used mostly as a DH (30 games), Pence has also played 16 games in left field and five in right.
Coming back to Philly, Pence would become a right-handed bat off the bench as a pinch-hitter while also providing occasional innings as a corner outfielder.
Texas was in the AL Wildcard race throughout the season’s first half. But having lost 11 of their last 15, the Rangers now find themselves 5.5 games in back of the second Wildcard spot and nine games out in the AL West Division. At some point soon they are going to have to do the right thing and sell on what has basically been a rental player in Pence.
Getting a big price in return will not be easy, despite his production. But any contender could use a player with the energy, dedication and skills of a Hunter Pence. The Phillies especially so, if a trade match can be found.
Perhaps the Rangers would take a flyer on someone like Nick Pivetta, just bumped to the bullpen by the Phillies in favor of newcomer Drew Smyly, for their rotation? 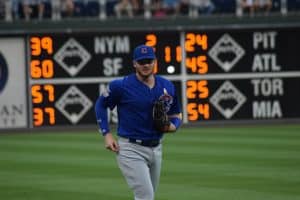 Ian Happ appeared as a utility player in each of the last two seasons with the Cubs, but has been at Triple-A all of this year. (Ian D’Andrea)
The other interesting available name is that of Ian Happ, currently playing at Triple-A Iowa in the Chicago Cubs system. Happ is a 24-year-old (he turns 25 next month) who appeared with the Cubs as a utility player in each of the last two seasons, but has not been called up yet in 2019.
Across the outfield, Happ appeared in 117 games in center, 88 in left and 38 in right field. On the infield he played in 46 games at second base, 24 at third base and saw action at first base for a pair of games.
This year at Iowa, Happ has split his time between center field (76) and second base (19) while also appearing twice in left field. He has produced 16 homers, 34 extra-base hits, 52 RBIs and 63 runs scored while also stealing nine bags.
The Cubs might actually be a fit for someone like either Cesar Hernandez or Maikel Franco. A straight-up swap of Happ for Hernandez would allow the Phillies to put Scott Kingery at second base on an everyday basis, with Happ taking over the center field depth spot and spelling almost anyone at any other position as well.
This is a deal that could potentially expand to see the Phillies go after Cubs backup catcher Victor Caratini as their own new backup behind the plate to replace Andrew Knapp, who has appeared over-matched for the most part. With the Cubs recent signing of Martin Maldonado and the anticipated return next week of two-time NL All-Star Willson Contreras, general manager Jed Hoyer may be inclined to swap both Happ and Caratini if the right pieces can be found in return.
Sure, let’s keep the focus on the starting rotation, where it belongs. But if Phillies general manager Matt Klentak doesn’t also have his eye on making improvements to the club’s bench, it could eventually sink the team down the stretch. Pence and Happ would upgrade the Phillies depth for the 2019 playoff push.
Originally published at Phillies Nation as “Two bats who could be available to bolster Phillies bench“