Wilkin Castillo waited a decade to deliver the game-winning hit

This is not a recording. The Philadelphia Phillies (39-37) lost (again) on Saturday, this time by a 5-3 score, when their bullpen collapsed (again) to blow a late-innings lead. And this was a second consecutive loss to the Miami Marlins (29-46), the team with by far the worst record in the National League.

It marks a sixth consecutive defeat for the Phillies. Eight out of nine, and 10 of their last 12, have resulted in their finishing on the lower side of the final score. The have won just six times over their last 20 games.
That is more than a losing skid, or a poor stretch of games. For a team that was 11 games over the .500 mark and in first place when it all began to slowly unravel, this is a complete and utter collapse. For fans, it has been excruciating to endure. Nothing changed this afternoon.
So they are 6-14 over the last three weeks. That is a .300 winning percentage. The lowest winning percentage right now by any team in Major League Baseball over this full season is the .286 mark owned by the woeful Baltimore Orioles. But the O’s at least won today, ending their own 10-game losing streak. Maybe the Phillies aren’t the worst team in the game right now, but you would have a hard time convincing the fan base.
There were hopeful signs early on. Vince Velasquez, given a second (third? fourth?) chance to demonstrate that he might be a viable starting pitcher took the ball and ran with it. He allowed just one hit, a third inning solo home run by JT Riddle, over five innings. Velasquez struck out five, walked none, and was in command the entire time, throwing 40 strikes among his 50 pitches.
In the bottom of that 3rd inning, the Phillies offense responded in a manner that fans have been waiting for all season. Bryce Harper and Rhys Hoskins slammed back-to-back home runs for the first time all year to put the Phillies on top 2-1. 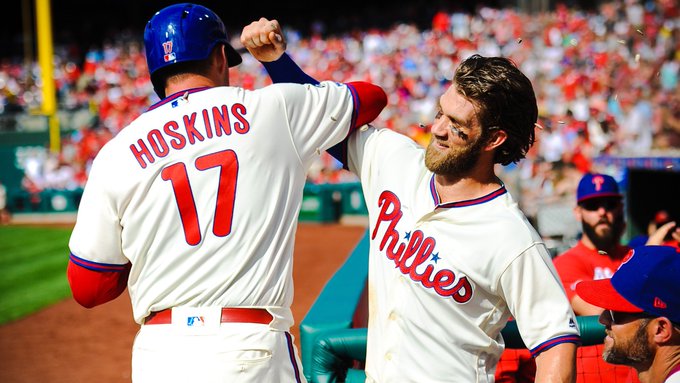 Then in the bottom of the 5th inning, the Phillies manufactured another run. Cesar Hernandez grounded a single, moved to second on a wild pitch by Marlins starter Elieser Hernandez, and scored when Harper slashed a base hit to the opposite field, beating the exaggerated shift put on against him by Marlins skipper Don Mattingly.

Phillies manager Gabe Kapler wasn’t around to see that one cross the plate. He was tossed for the first time in his career an inning earlier after a spirited argument with the umpiring crew. He also wasn’t around to watch as his bullpen gave away that 3-1 lead.

UK Phillies@UkPhillies
Gabe unleashed! Every right too as well!

33 people are talking about this
Twitter Ads info and privacy
The Marlins scored three times in the top of the 7th inning to regain the lead. Adam Morgan, newly activated from a stint on the Injured List, came out rusty. The lefty committed the cardinal baseball sin of walking the leadoff man, Garrett Cooper. Morgan then surrendered consecutive base hits to Brian Anderson and Starlin Castro, the latter hit scoring Cooper and cutting the Phillies lead to 3-2.
The Phillies nearly escaped the inning with the lead intact when Cesar Puello hit into a fielder’s choice. Hoskins fielded his grounder, fired home to J.T. Realmuto, who fired to third baseman Brad Miller, getting Anderson. Morgan then got Riddle to pop out to shortstop for the second out.
With runners at first and second and two outs, bench coach Rob Thomson, subbing for the ejected Kapler, chose to bring in Edubray Ramos to face switch-hitter Wilkin Castillo. The 35-year-old catcher hadn’t appeared in a big-league game since 2009, and was hitless on the day. So Castillo didn’t have a hit in Major League Baseball for a full decade. Now he does.
Castillo wasted no time, ripping a two-run double to right field that scored Castro and Puello, pushing the Fish into the lead at 4-3. In the top of the 8th, the Marlins got an insurance run when Cooper singled off J.D. Hammer to score Curtis Granderson, who had doubled. 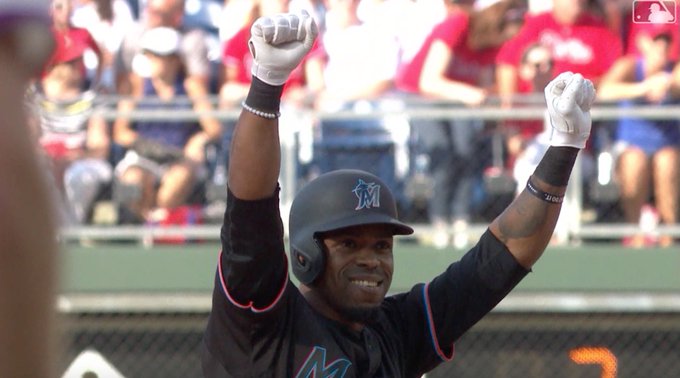 He now has a hit streak that spans 10 years. #JuntosMiami

242 people are talking about this
Twitter Ads info and privacy
For Castillo, the hit was a rush, helping justify his decade-long journey through the minor leagues with six different organizations.
“It was something indescribable,” Castillo said through an interpreter per Paul Casella for MLB.com. “It’s a lot of effort, just playing winter ball in the Dominican League, the Mexican League, the Minor Leagues for 10 years. So just being up here and see things happening, I thank God, and I thank the Marlins for giving me the opportunity to be here at the Major League level.”
In the bottom of the 8th, the Phillies got a leadoff single from Hernandez. But then Harper, who was 2-2 with a walk to that point of the game, grounded into a 6-3 double play. The Marlins would take their 5-3 lead into the 9th inning.
The Phillies loaded the bases with two outs in the 9th on a double by Jean Segura, a single by Scott Kingery, and a walk to pinch-hitter Roman Quinn. That brought Hernandez to the plate again, this time with a chance to really become a hero. Instead, he popped weakly to second and the losing streak was extended.
The Marlins will go for the sweep on Sunday afternoon at Citizens Bank Park. The Phillies will try to end this losing streak. It will end at some point. Yet even when it does, it will serve to prove nothing. This team needs a run in the other direction, an extended winning stretch where the offense is clicking, or their season is going to completely disintegrate before our eyes.
Right now, the Phillies look like the worst team in Major League Baseball. Certainly in the National League. If they aren’t, if this is just a losing skid or a “phase”, then it’s well past time to prove it. You can only talk about your alleged talent for so long before having to back up that talk by actually winning ball games. Even one game.
Originally published at Phillies Nation as “After Saturday’s loss, are the Phillies the worst team in baseball?“