The Atlanta Braves (41-29) showed a ton of heart, taking the opening game of a key road series by a 9-8 score on Friday night over the visiting Philadelphia Phillies (38-31) at SunTrust Park.

The Phillies led almost the entire night, and appeared to be on their way to an exhilarating victory. But the Braves never surrendered, battling back every time the Phillies tried to open their lead wider.
In the end, it came down to Atlanta having to overcome a two-run deficit with the Phillies closer on the mound in the bottom of the 9th inning. A closer who was celebrating his 30th birthday, and who hadn’t blown a save opportunity since last May.
The Phillies got on the board first, stringing together three consecutive base hits in the top of the 2nd inning from Jay Bruce, Scott Kingery, and Sean Rodriguez against Atlanta starter Max Fried. But in the bottom of the frame, the Braves got that one right back when Josh Donaldson led off with a solo home run.
The tie didn’t last for long. Bryce Harper ripped his 12th home run of the season, a two-run shot in the top of the 3rd inning, to give the Phillies a 3-1 lead. Kingery made it 4-1 when he led off the top of the 4th with a solo homer, his 8th of the season. 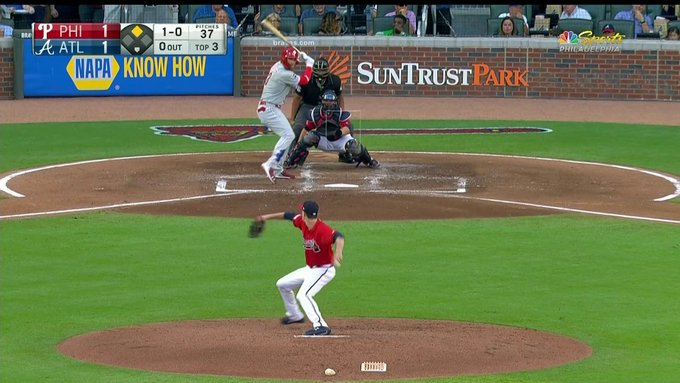 Phillies Nation@PhilliesNation
Harper’s homer is his 12th of the season. He’s an equal opportunity blaster: six vs lefties, six vs righties.

17 people are talking about this
Twitter Ads info and privacy
In the top of the 5th, some wildness from Fried with two outs allowed the Phillies to get another run. After he had retired the first two Phillies batters,the Braves southpaw yielded a base hit to J.T. Realmuto and then walked Rhys Hoskins. Fried then threw two wild pitches, with Realmuto moving to third on the first one and scoring on the second. The run made it a 5-1 lead for the visitors.
Freddie Freeman led off the bottom of the 5th with his 19th homer of the year to make it a 5-2 ball game. But the Braves defense would let them down big-time in the top of the 6th inning. With two outs, second baseman Ozzie Albies‘ error allowed Realmuto to reach base. He was followed by Hoskins, who lined a missile over the dead-center field wall. The 15th home run of the season for the Phillies first baseman pushed the lead back out to a 7-2 margin. 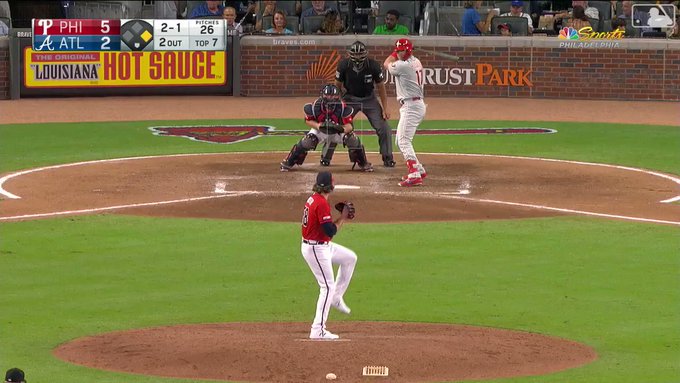 See Phillies Nation’s other Tweets
Twitter Ads info and privacy
The Braves came right back with two of their own in the home half of the 7th. Brian McCann cranked the third leadoff homer of the night for the hosts to cut their deficit down to 7-3. Then with two outs, Ronald Acuna doubled, Dansby Swanson walked, and that was all for Phillies starter Nick Pivetta.
The right-hander looked strong for much of the night against a tough lineup. He allowed four earned runs, three of those scoring on the leadoff home runs. Pivetta struck out six and walked two in making a career-high 116 pitches.
Gabe Kapler sent to his bullpen for Vince Velasquez, and the recently converted starter immediately surrendered an RBI single to Freeman, cutting the Phillies lead to 7-4. But with the tying run at the plate, Velasquez struck out Donaldson to end the threat.
Kingery led off the top of the 8th with a double for his third hit of the ball game. He was bunted over to third by Rodriguez and then raced home to score on a deep RBI sacrifice fly by Cesar Hernandez, and the Phillies lead was back out to 8-4.
The Braves kept coming in the bottom of the 8th, however. Jose Alvarez walked Nick Markakis to lead off the frame. Markakis moved to second on a soft ground out by McCann, then scored on a base hit by Albies to make it 8-5. 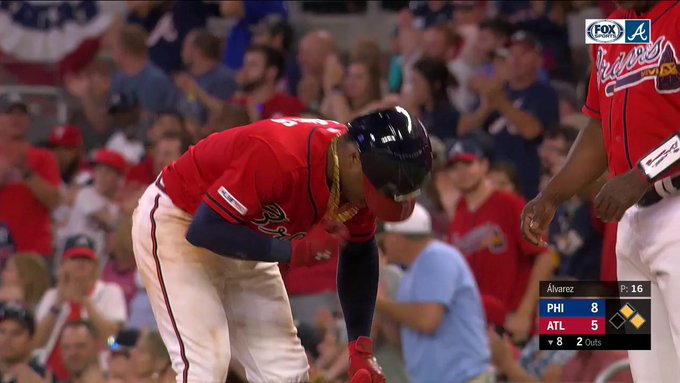 Ozzie Albies stays hot and drives home Nick Markakis with an RBI single. The @Braves are back within three in the eighth inning.

54 people are talking about this
Twitter Ads info and privacy
Braves skipper Brian Snitker then sent up Charlie Culberson to pinch-hit, and Culberson delivered with a triple to the deep right field corner. Albies raced home, and the relentless Braves had cut the deficit to 8-6.
Kapler went to his closer, Hector Neris in the bottom of the 9th inning to try and close it out. Celebrating his 30th birthday and not having blown a save opportunity since last May 11, Neris gave up a lead single to Swanson. Atlanta would bring the tying run to the plate with their 3-4-5 hitters due up.
Freeman went up 3-0 in the count, but Neris battled back to strike out the Braves most dangerous hitter for the first out. Donaldson then grounded to third for the second out. Neris then walked Markakis on four pitches, and Atlanta had the winning run at the plate in the form of rookie Austin Riley.
Riley laced a line drive double to left to score Swanson and make it an 8-7 ball game. The ball took a wild bounce on Jay Bruce, but the Phillies left fielder made a nice play to keep the tying run at third base.
With runners at second and third and two outs, one of the great Phillies killers of the last decade stepped to the plate in McCann. The Braves catcher would keep that title, dropping a 2-2 base hit into left-center, scoring Markakis with the tying run and Riley with the game-winner. 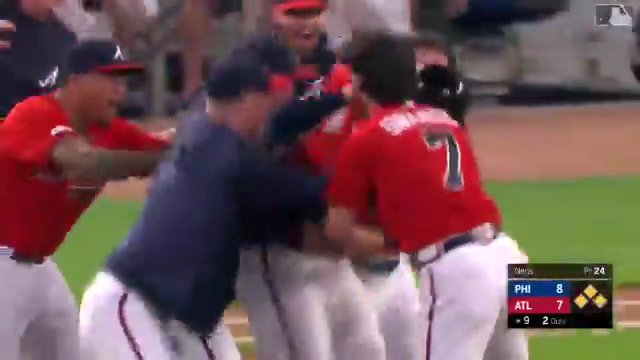 Down 2 going to the bottom of the 9th…

2,365 people are talking about this
Twitter Ads info and privacy
In the end, the bullpen surrendered five runs on six hits over the final 2.1 innings. Neris blew his first save after 17 straight successful conversions. There is no other way to frame it than to call this one an absolutely crushing, deflating, demoralizing loss for the Phillies. They have now dropped nine of their last 14 games while the Braves won their ninth straight to open up a 2.5 game lead in the division.

The Braves backstop went 3-5 with a home run and the game-winning, two-run walkoff single in the bottom of the 9th inning. The homer was his 23rd against the Phillies, more than any other opponent over his 15-year big-league career. The two RBIs on his walkoff base hit gave him exactly 1,000 on his career.