The inevitable Bryce Harper breakout is unfolding before our eyes

Bryce Harper has finally gotten on an extended hot roll

In late February, at the end of an off-season that was psychologically grueling for the Philadelphia Phillies fan base, club management led by principal owner John Middleton finally nailed down the big free agent prize they had been chasing all winter.

When 26-year-old outfielder Bryce Harper agreed to his 13-year, $330 million contract with the Phillies, those fans saw it as a signal that their team was back and ready to contend. Harper would be the linchpin of a revamped Phillies lineup, bashing balls with record-setting frequency over the Citizens Bank Park fences.
But as the Phillies worked their way to the top of the National League East Division standings over the first seven weeks of the season, Harper largely struggled.
Through May 14, a period covering his first 41 games in red pinstripes, Harper was hitting just .219 with a .432 slugging percentage. While he was on pace to drive in and score close to 100 runs and blast 25 home runs, that was a far cry from what many in the vocal Philly sports fan base expected in return for the big dollars.
Also, Harper was striking out at an alarming rate. He was on pace for more than 200 strikeouts, which would eclipse his previous career-high of 169 whiffs set just last season.
It wasn’t that Harper was showing a bad eye at the plate. He was also on a pace to walk more than 140 times, which would also surpass the career-high 130 free passes which he drew a year ago, a figure which led all of Major League Baseball.
But those fans who were starting to once again fill up the South Philly ballpark, who were following the team more closely on TV, didn’t want to see Harper working walks like some leadoff man. They wanted bombs, jacks, home runs – preferably of the majestic variety.
Callers to local sports talk radio outlets and posters on social media wanted to see Harper become a more consistently dynamic offensive presence in the middle of the Phillies lineup.
Their wish has been granted.
As could be predicted, Harper has begun rounding into form over the last couple of weeks. In the previous 11 games leading up to Thursday afternoon’s series finale with Saint Louis, Harper was slashing .318/.367/.636 with three homers, 13 RBIs, eight extra-base hits, and seven runs scored.
Then in that Thursday loss to the Cardinals, Harper stayed red hot. He went 3-4 with a pair of doubles and drove in a run. One of the doubles just barely missed becoming his 11th home run of the year. The two doubles give him 18 on the season, way ahead of the six which he had at this same time a year ago.
Harper is now on nearly a 30-homer and a nearly 50-doubles pace, and rising. He is also on pace to score nearly 100 runs and drive in roughly 120. His batting average, which had fallen to .219 on May 14, is up to the much more acceptable .252 mark following today’s three-hit game. 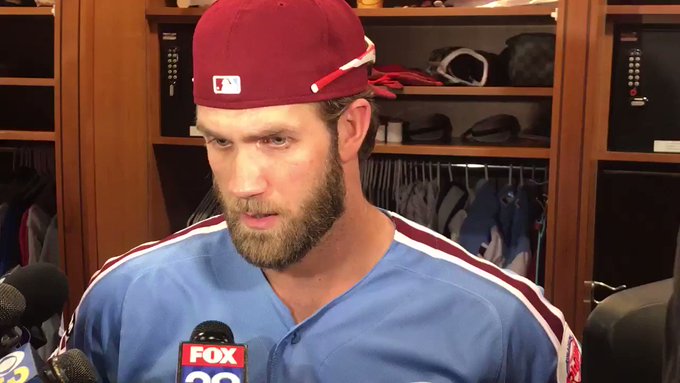 The #Phillies’ Bryce Harper on hitting the ball well despite not walking that much:

See Tom Moore’s other Tweets
Twitter Ads info and privacy
Even when he wasn’t hitting well, Harper was contributing to the Phillies strong start. He was consistently making excellent plays on defense in right field, and hustling on the base paths. On that idea of always playing hard, Harper was quoted by Jim Salisbury of NBC Sports Philadelphia after another three-hit night helped the Phillies to a victory on Wednesday night:
“That’s what the fans expect, that’s what I expect and I know my mom and dad are watching at home and that’s what they expect, too. So you just have to play the game hard and play it right.”
Harper is going to be just fine. He is everything that the Phillies hoped he would be when they signed him. And those fans who were so vocal in a negative manner just a couple of weeks ago? Well, they’ve been silenced – for now. We know this is Philly, and he is just another inevitable slump away from the critics re-emerging. Let’s hope they have to wait awhile for their next chance.
Originally published at Phillies Nation as “Bryce Harper has begun to silence the early season critics“