Jake Arrieta pitched the Phillies past Milwaukee at Miller Park

This was shaping up to be the type of  game that has bedeviled the Philadelphia Phillies all season. Build a lead, fail in chances to put it away. Watch the opposition come back late. Take a small lead into the last inning. Home opponent rallies to a walkoff win against the bullpen.

Three times already this season the opposition has done it. Walked off with a win in their final at-bats. It just happened four days ago in Chicago, for goodness sakes. And here we were again. Phillies build a 4-0 lead. Two on, one out in the top of the 7th inning. Nothing to show for it.
The Milwaukee Brewers (29-24) used a solo homer off the bat of Mike Moustakas in the home 7th to get on the scoreboard. Then a leadoff single by Eric Thames in the bottom of the 8th was followed one out later by an RBI double from Orlando Arcia. Suddenly it was a 4-2 game with the tying run at the plate.
But something different would happen this time. The bullpen didn’t blow the game, at least in part because they weren’t in the game. Starting pitcher Jake Arrieta was still in there, and manager Gabe Kapler was showing faith in the veteran right-hander. Arrieta rewarded that faith, retiring the final two batters in the frame and keeping the lead at 4-2.
And then the Phillies bats did something they have done very seldom this season. They struck a late blow against the opposition. Actually, a couple of late blows. Big blows. After Jean Segura led off the top of the 9th with a base hit, Rhys Hoskins followed two batters later by blasting his 13th home run of the season out high and deep to left-center field. 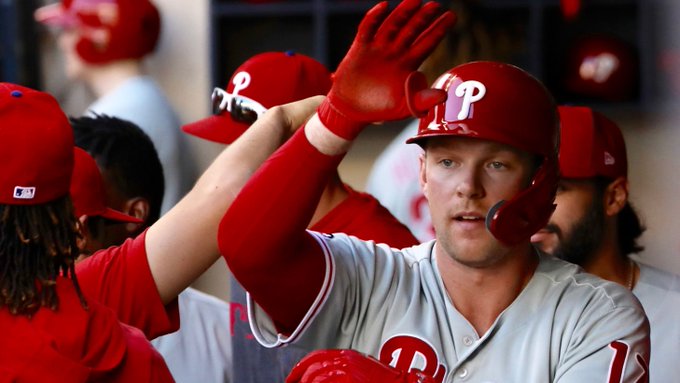 Take a look at your calendars, folks…

Just like that, the Phillies had breathing room at 6-2. And then to put an exclamation point on their apparent resolve to put this one away, J.T. Realmuto immediately followed by drilling his 8th homer of the season over that same left-center field wall.

Kapler then finally turned to his bullpen, and lefty veteran Jose Alvares closed things out with a 1-2-3 bottom of the 9th, striking out Moustakas swinging to end it. The Phillies (31-21) thus put the finishing touches on a 7-2 victory at Miller Park on Saturday evening, clinching the series on the road against a tough opponent.
The win also moved them to 10 games over the .500 mark for the first time since August 31 of last season. And combined with a loss by the second place Atlanta Braves, it pushed the Phillies lead in the National League East Division standings out to 2.5 games, three in the loss column.
The Phillies had built their early lead by chipping away for single runs in four of the first five innings. In the 1st, Andrew McCutchen remained hot by leading off with his 8th home run of the year. 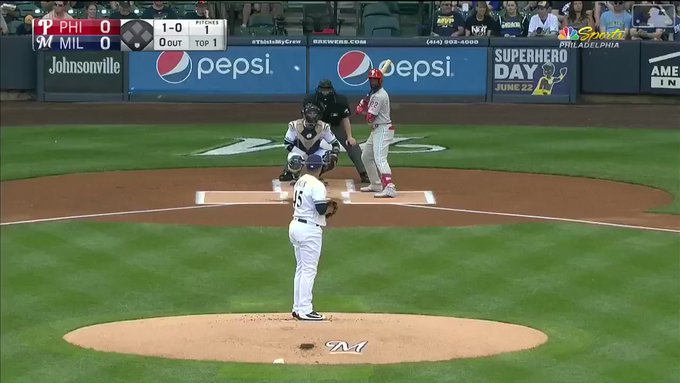 Two pitches in, @TheCUTCH22 gives us a lead. #RingTheBell

283 people are talking about this
Twitter Ads info and privacy
In the top of the 2nd, singles by Scott Kingery and Odubel Herrera and a walk to McCutchen loaded the bases with two outs. Segura followed by working his own free pass from Brewers starter Jhoulys Chacin, forcing in Kingery with a run to make it 2-0.
With two outs in the 3rd, Cesar Hernandez stayed hot as well, ripping his 5th homer of the season out on a line to right-center. In total, the Phillies homered a season-high four times in the game. They made it 4-0 when Hoskins doubled with one out and Hernandez drove him home with a two-out RBI single in the top of the 5th inning. 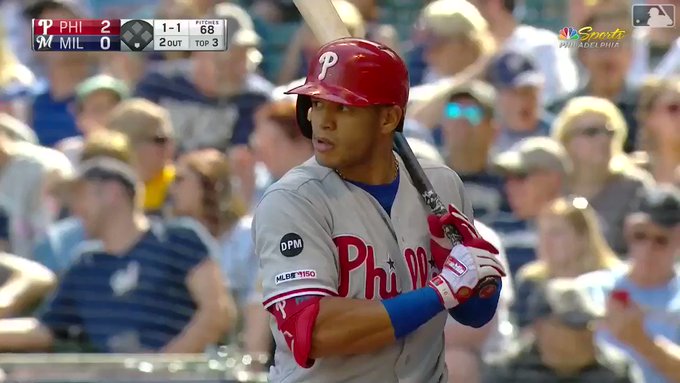 134 people are talking about this
Twitter Ads info and privacy
Arrieta was masterful in holding the powerful Brewers lineup off the board for the first six innings. He would earn his 5th win of the season, tying Aaron Nola and Zach Eflin for the staff lead. It was also his staff-high seventh Quality Start of the year.
“Preserving the bullpen is what the best teams do,” said Arrieta after the outing per MLB.com’s Andrew Wagner. “You reap the rewards of that late in the season in July, August and September. Doing it on the road, winning the series, with a chance to sweep them tomorrow is really good for our ball club.”
View image on Twitter 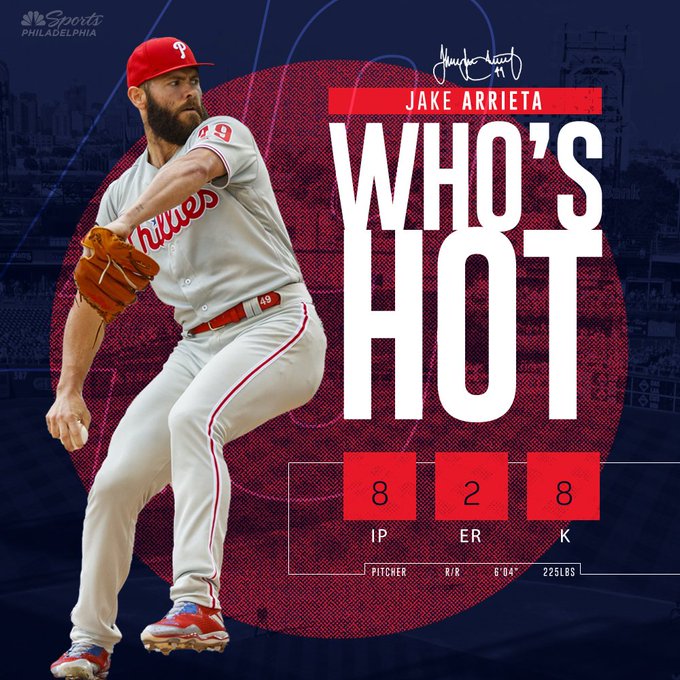 See NBC Sports Philadelphia’s other Tweets
Twitter Ads info and privacy
The Phillies will send Eflin out in Sunday afternoon’s series finale. He’ll be opposed by right-hander Brandon Woodruff, who has been the best starting pitcher this season for the Brew Crew. It would be nice to see the Phillies hitters smell the sweep and really go for the jugular on the Milwaukee hurler.

The Phillies veteran right-hander was masterful in tossing his seventh Quality Start of the season. It was an important outing for a couple of other reasons as well. He had fared poorly in his most recent two outings prior to Saturday, so it was nice to see him bounce back with such a dominant effort against a good offense. And it also gave the bullpen a much-needed rest in the middle of the most difficult part of the schedule.

Originally published at Phillies Nation as “Phillies put one away late, clinch series victory with 7-2 win over Brewers“