Phillies hope to keep Bernie Brewer from sliding much this weekend

The Philadelphia Phillies (29-21) will be spending Memorial Day weekend at Miller Park, home of the Milwaukee Brewers (29-22), who are currently sitting in second place in the National League Central Division standings.

The Brew Crew trail the Chicago Cubs, against whom the Phillies just split a four-game series, by 1.5 games, three in the loss column. They enjoyed an off-day on Thursday prior to this series, coming off an 11-9 victory over the Cincinnati Reds in their previous game on Wednesday night.
It was just over a week ago that the Brewers captured three of four games between the two teams at Citizens Bank Park. The Phillies won the opener of that series by 7-4 when J.T. Realmuto and Odubel Herrera produced run-scoring doubles to break up a 4-4 tie game. But Milwaukee roared back to capture the final three games by a combined 22-6 runs margin.
The two clubs have proven very evenly matched in recent years with the Phillies holding a 10-9 edge in their 19 meetings over the three previous combined entering this 2019 season.
The Brewers (250) and Phillies (249) rank 4th and 5th respectively in the NL in runs scored, though Milwaukee has played one more game. The Atlanta Braves (252) are 3rd, and also have one more game than the Phillies.
Milwaukee is a well-rounded, dynamic offensive ball club. The Brewers hitters collectively rank 4th in OPS and 5th in OBP. They lead the entire National League in home runs and are tied for the league lead in stolen bases. No slouch with their gloves, the Brew Crew defenders have committed the 5th-fewest errors in the NL while handling the 2nd-most chances.
After splitting their series at Wrigley Field with the Cubs, the Phillies are now 6-5 during what we have described previously here at Phillies Nation as a 23-game “crucible”, a nearly month-long stretch against top-notch competition from outside the NL East Division. That stretch continues this weekend.

Keston Hiura: the Brewers top prospect was promoted to the big-leagues for the first time during last week’s series against the Phillies. The 22-year-old was Milwaukee’s first round pick at 9th overall in the 2017 MLB Draft out of the University of Cal-Irvine. After ripping minor league pitching at five levels over the next two years, he has slashed .273/.333/.455 with two homers over his first eight games in Major League Baseball and has taken over as the Brewers starting second baseman. He could end up holding the position for years to come.

Craig Counsell is in his fifth year at the helm in Milwaukee, having taken over in the middle of the 2015 campaign. He has guided the club to an overall 345-330 record in that time. After his 2017 club missed an NL Wildcard playoff berth by just a single game, he led the team to a division crown last year.
Counsell played for 16 seasons in the big-leagues with five organizations. He played with Milwaukee in 2004 and then over his final five years from 2007-11. He was a teammate of Braun’s when the two faced the Phillies in the 2008 National League Division Series.
As a second baseman with the Florida Marlins, Counsell scored the title-winning run at Pro Player Stadium in Miami in the bottom of the 11th inning of the decisive Game 7 in the 1997 World Series. He reached on an error with one out, then came home three batters later on Edgar Renteria‘s single to center field. 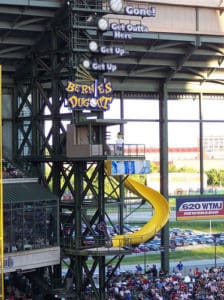 Bernie Brewer makes his slide after each Brewers home run and victory. (Mattingly23)
Miller Park opened as the Brewers home for the 2001 season. The facility features the only fan-shaped convertible roof in the United States, which can open and close in as little as 10 minutes. It holds 41,900 as a normal capacity but has been filled with a record 46,218 for a 2003 game with the rival Cubs.
Two of the unique fun features at Miller Park include the “Sausage Race“, a foot race between five people in “racing sausage” costumes, which takes place in the middle of the 6th inning of each game. And high above left-center field, the mascot “Bernie Brewer” takes off down a long, winding, yellow slide after each home run hit by the Brewers and after each of their victories.
During the traditional 7th-inning stretch, in addition to singing “Take Me Out to the Ballgame”, Brewers fans also sing “Roll Out the Barrel” as a salute to the town’s beer-making history. Fans watching on television can usually spot “Front-Row Amy” sitting just behind home plate. Let’s just say that it’s hard to miss Amy Williams, who has held her $5,670 season ticket there for the last two years.
Following the 2020 season, Miller Park will no longer be known by that moniker. The naming rights to the stadium, which have belonged to the Miller Brewing Company for 20 years, will expire. Beginning with the 2021 season the park will be renamed for the new rights holders, American Family Insurance.
Originally published at Phillies Nation as “Phillies series opposition preview: Milwaukee Brewers“