The Philadelphia Phillies (20-15) downed the host Saint Louis Cardinals (21-15) by an 11-1 score on Tuesday night at Busch Stadium in what was a complete reversal of the series opener between the two clubs.

After suffering a 6-0 defeat in that opener, a game in which they generated just six hits, the Phillies offense exploded. The lineup produced a dozen hits, with the heart of the order producing 10 of those, and scored in double-digits for the fifth time this season already. The 2018 Phillies scored in double-digits just nine times all season.
Meanwhile, starting pitcher Aaron Nola shut down the Cardinals lineup for most of the night. Nola allowed just three hits over six innings, striking out seven and walking one. The right-hander had a shutout going into the bottom of the 6th when pinch-hitter Matt Wieters got to him for a solo home run.
The Phillies put up a big crooked number by scoring six in the top of the 2nd inning. Odubel Herrera got things started with a double to center. He then moved to third on a passed ball by the usually reliable Cardinals veteran backstop Yadier Molina.
Cesar Hernandez then drew walk and Maikel Franco reached on a fielder’s choice that included a throwing error on Cards’ second baseman Kolten Wong and a victorious challenge by manager Gabe Kapler. Herrera scored on that play, putting the Phillies on the board first. Nola then also reached on a force play with Hernandez scoring to make it a 2-0 game.
Andrew McCutchen worked a walk to load the bases. One out later, Bryce Harper stepped to the plate. The struggling right fielder worked the count to 2-1 and then drove a slider from Cardinals starter Dakota Hudson out to right field for his first-ever grand slam in a Phillies uniform. Harper’s seventh home run of the season pushed the lead out to 6-0. 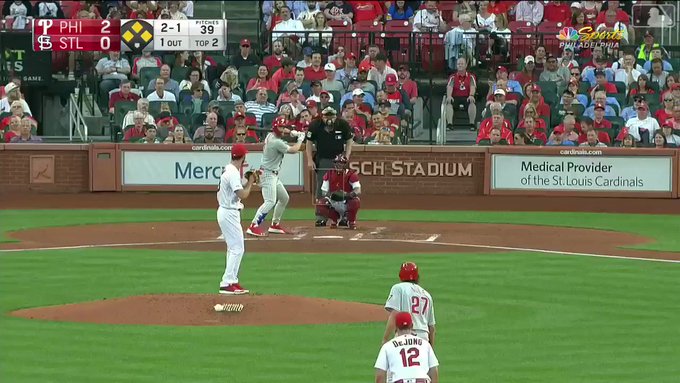 Hey now, you’re a rock star, get the show on, get paid. #RingTheBell

3,026 people are talking about this
Twitter Ads info and privacy
In the top of the 5th inning, consecutive singles from Harper, Rhys Hoskins and J.T. Realmuto produced another run. Hoskins then scored when Herrera grounded into a force play and it was 8-0 in favor of the Phillies.
Nola finished out the bottom of the 6th after surrendering Wieters’ home run and gave way to the bullpen. Juan Nicasio tossed a pair of shutout frames and then 22-year-old rookie Edgar Garcia wrapped things up with a scoreless 9th inning.
The Phillies offense wasn’t done, however. Hoskins one-out double was followed by a Realmuto single to put runners at the corners in the top of the 7th inning. Herrera then doubled to right to score Hoskins and a sac fly by Cesar Hernandez scored Realmuto to push the Phillies up to double-digits at 10-0.
In the top of the 9th inning, Hoskins put a cherry on top by blasting his 11th home run of the season out deep to left field. It was the fourth hit of the night for the Phillies first baseman.
On Wednesday afternoon the Phillies will be attempting something that the club has not accomplished since 2012, winning a series in Saint Louis. Jerad Eickhoff will take the mound for the Phils with talented 23-year-old Jack Flaherty going for the Cards. Then during a Thursday off-day they travel to Kansas City for a weekend Inter-league series with the Royals.

The Phillies ace produced his third straight solid start and best of the season. After Harper’s grand slam gave him an early cushion, he shut the Cards down and never allowed them into the game.
It was good to see Harper crack that blast. He had two hits, a walk, and scored twice. Hoskins blasted a homer as part of a four-hit night. But the most important story of this victory was the performance by the club’s starting pitcher.