Jimmy Rollins officially retires as a member of the Philadelphia Phillies

Prior to Saturday night’s big division rivalry game with the Washington Nationals, the host Philadelphia Phillies will hold a ceremony to honor long time shortstop Jimmy Rollins on the occasion of his official retirement from Major League Baseball.

Rollins, who turned 40 years of age back in November, played with the Phillies for the first 15 of his 17-year career in the big-leagues.
Born in Oakland, California, Rollins was the Phillies 2nd round pick in the 1996 MLB Draft out of Encinal High School in Alameda, California.
After getting his feet wet with the Rookie-level Martinsville club in the Appalachian League during that first pro summer of 1996, Rollins developed into an all-around offensive threat who could field the shortstop position brilliantly.
Over the 1997-99 seasons, he collected 110 extra-base hits and stole 94 bases. Spending most of the 2000 season with Triple-A Scranton/Wilkes-Barre, Rollins hit .274 with 51 extra-base hits and 24 steals, earning his first big-league promotion for a 14-game cup of coffee with the Phillies that September.
His first appearance in a Phillies uniform in an official MLB game came on Sunday afternoon September 17, 2000 at Veteran’s Stadium. That day he hit second in manager Terry Francona‘s lineup and provided an immediate spark. Rollins delivered two hits including a triple, drew a walk, stole his first base, and scored twice to contribute towards a 6-5 win.
Rollins started in the leadoff spot for the first time the very next day at The Vet against the Pittsburgh Pirates. he again delivered two hits and also recorded the first RBI of his career with a base hit in the bottom of the 6th inning to score Tom Prince.
He would play in 14 games that first month, 11 of those as the starter at shortstop. Seven times he produced a multi-hit game, setting himself up as the starter at the position to open the 2001 season.
Under new manager Larry Bowa, the Phillies began emerging for the first time in years as a contender, and Rollins was a primary reason. On May 2, 2001 at Veteran’s Stadium, Rollins led off the bottom of the 4th inning against Colorado Rockies starter Brian Bohanon and blasted the first home run of his career.
These were just the first milestone moments of what would become one of the most storied careers in the history of the franchise. By the time it was all over, Rollins had become the franchise all-time Hit King with 2,306 hits for the Phillies. 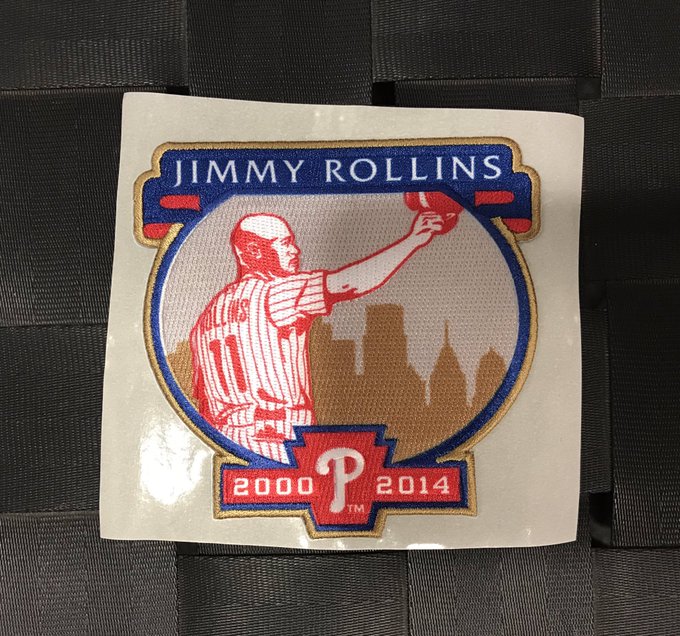 Phillies are wearing a special patch on their jerseys tonight for Jimmy Rollins’ retirement night:

46 people are talking about this
Twitter Ads info and privacy
Rollins current place on the Phillies all-time leaderboards:
“JRoll” also produced 46.4 WAR with the Phillies. He finished 3rd in the 2001 NL Rookie of the Year voting behind Albert Pujols and Roy Oswalt. Rollins was the 2007 National League Most Valuable Player and received NL MVP votes in four other seasons.
He was a three-time NL All-Star, a four-time NL Gold Glover at shortstop, and was the 2007 NL Silver Slugger Award winner at shortstop for a season in which he became one of just four MLB players in history to record a 20-20-20-20 season: at least 20 homers, doubles, triples, and stolen bases.
Rollins had numerous tremendous, memorable plays during his career, and fans can argue for days about which was the best or most important. For me, two stand out.
Defensively, Rollins diving stop and perfect shuffle to Chase Utley began a double-play that clinched the 2008 National League East Division crown on the final day of the regular season. The Phillies would go on to win the World Series that year.
With the bat, it has to be his clutch two-out, two-strike, walkoff double into the right-center field gap at Citizens Bank Park off Los Angeles Dodgers closer Jonathan Broxton to give the Phillies a 6-5 come-from-behind victory and a 3-1 lead in the 2009 NLCS.
There is no doubt that Rollins will be enshrined on the Phillies Wall of Fame sometime early in the 2020’s. He will make for an interesting argument in a few years as a nominee for the Baseball Hall of Fame. But for tonight the Phillies legend will settle for a joyous celebration in front of more than 40,000 adoring fans.
Originally published at Phillies Nation as “As Phillies honor Jimmy Rollins, a look at J-Roll by the numbers“