The Phillies rode a Zach Eflin gem to victory

After losing the opener on Thursday night in heartbreaking fashion, the Philadelphia Phillies needed to sweep the next three in a row in order to win this four-game weekend series. Sweep they did, finishing things off with a big 5-1 victory on Sunday afternoon at Citizens Bank Park.

The Phillies got a complete game gem from starting pitcher Zach Eflin, who scattered seven hits and walked no one while striking out three Marlins batters.
It was the first official complete game by a Phillies starting pitcher since Ben Lively was credited with one in an eight-inning performance during a 3-2 loss at Washington on September 10, 2017.
This was the first complete game victory by a Phillies pitcher since Jeremy Hellickson shut the Marlins out on three hits back on September 17, 2016. Coming at the end of a long, wild 17-game stretch without a day off, the outing by Eflin came at a great time for a tired, battered bullpen.
The Phillies (16-12) continue to lead the National League East Division standings while the visiting Miami Marlins (8-20) sit at the bottom of the division, where they are likely to remain for the rest of the year.
In the bottom of the 1st inning the Phillies drew first blood when Bryce Harper drew a two-out walk and came all the way around on a double by Rhys Hoskins. 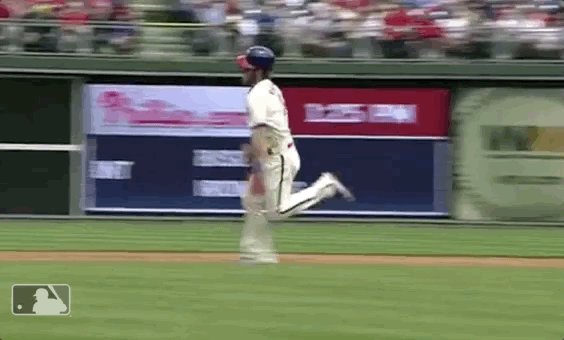 We’d lose the helmet too if our hair looked *that* good.

297 people are talking about this
Twitter Ads info and privacy
With one out in the bottom of the 3rd inning, Andrew McCutchen worked a walk and raced around on a triple by Jean Segura, who was back in the lineup after getting beaned in the head on Saturday night. Segura then scored on a ground out by Harper and it was 3-0 in favor of the Phillies.
The RBI was the 20th for Harper since the start of the season. It gave the Phillies three players (Hoskins and Maikel Franco) with 20+ RBI prior to the month of May for the first time in franchise history.
The Marlins got on the board in the top of the 4th thanks largely to the latest in a series of defensive gaffes by Phillies second baseman Cesar Hernandez. A wild pitch by Marlins starter Pablo Lopez (2-4) in the bottom of the 6th got that run back, with Segura racing home from third base on the play.
Fireballing reliever Tayron Guerrero, who dominated the Phillies back on Thursday night, was brought on by Marlins manager Don Mattingly for the bottom of the 8th inning.
The right-hander came out firing high-90’s heat again, touching 100 mph once, but was wild this time. He walked three around another hit by Segura, his third of the afternoon. The third walk came to Hoskins with the bases loaded, bringing in a run that made it the final 5-1 score.
Eflin (3-3) came out for the 9th inning at 99 pitches and made short work of the Miami hitters, setting down the side 1-2-3 to finish off his brilliant Sunday afternoon performance.
The Phillies will now enjoy an off-day before resuming a nine-game home stand, welcoming in the Detroit Tigers for a quick two-game Inter-league series on Tuesday and Wednesday. That will be followed by a visit from the division-rival Washington Nationals next weekend. 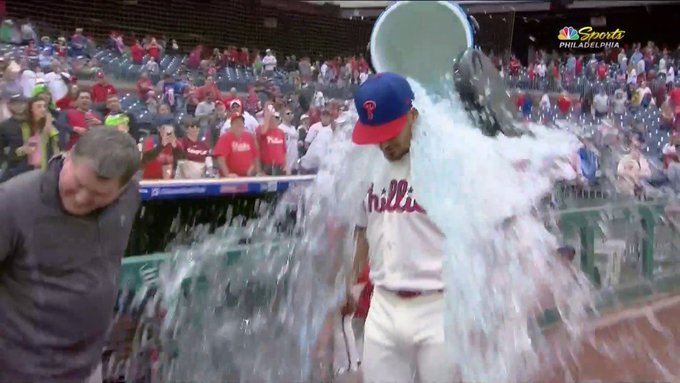 After a complete game, Zach Eflin gets a well-deserved early shower.

The Phillies starting pitcher was brilliant on the afternoon. He was firing his four-seam fastball effectively as his lead pitch at 93-94 mph, mixing in the two-seamer. From time to time he would drop a curveball and slider to keep the Marlins batters off-balance. It was a masterful performance from the 25-year-old who is emerging as pivotal member of the starting rotation.