The Philadelphia Phillies (15 – 12) and Miami Marlins (8 – 19) engaged in a wild one down in South Philly on Saturday night. In the end, the Phillies would come out on top at Citizens Bank Park by a 12-9 score, but not before sweating out the end of what looked early-on as if it would be a blowout for the home team.

The Phillies put up crooked numbers in both the 2nd and 5th innings to blow out to a 10-1 lead over the first half of the contest. Nick Williams blasted his first home run of the season, a solo shot with one out in the second to get the scoring started.
Cesar Hernandez and Maikel Franco followed Williams with singles, and starting pitcher Jake Arrieta bunted them over into scoring position with two outs. A passed ball by Jorge Alfaro allowed Hernandez to score to make it a 2-0 game. 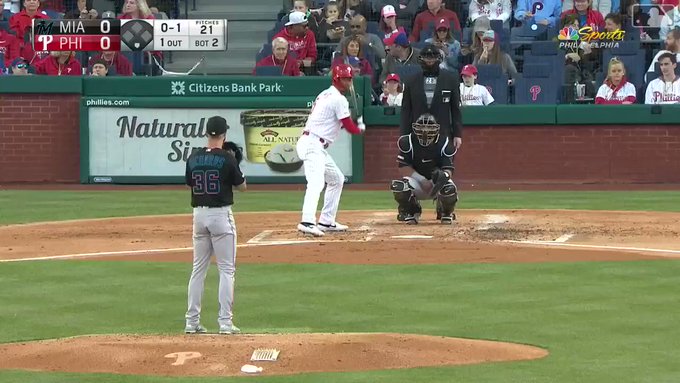 Sending one out to his pen pals. #RingTheBell

147 people are talking about this
Twitter Ads info and privacy
Andrew McCutchen then drew a walk from Marlins starter Trevor Richards. That was followed by a scary moment as shortstop Jean Segura, just activated today after a stint on the Injured List, was plunked on the head. He walked off under his own power and was replaced by Sean Rodriguez. Bryce Harper then ripped a two-run double to right, scoring both Franco and McCutchen to give the Phillies an early 4-0 lead.

Scary moment as Segura hit by pitch in helmet

Jean Segura, just activated from the injured list, left Saturday night’s game after being struck in the helmet by a fastball.

See Phillies Talk’s other Tweets
The Marlins got one back in the top of the 3rd inning when Starlin Castro grounded into a 6-5 force out with the bases loaded that scored Curtis Granderson. The Phillies got that one back when McCutchen drilled his fifth home run of the season out to left field. 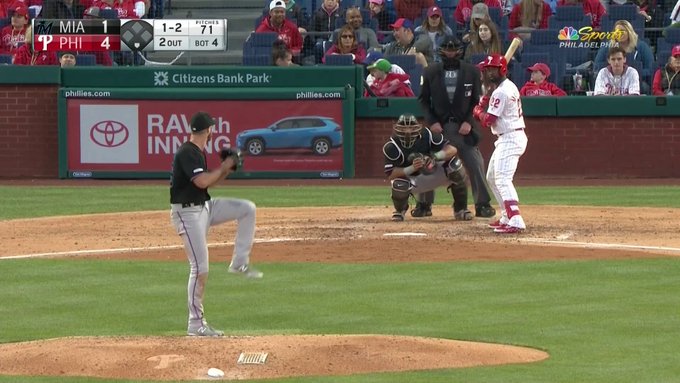 He hits his 5th homer of the season to give the Phillies a 5-1 lead.

31 people are talking about this
Twitter Ads info and privacy
Holding a 5-1 lead, the Phillies appeared to break out to an insurmountable lead when they scored five times in the home 5th inning. The big blow was a two-run single by Franco. That was followed by a run-scoring infield single from Arrieta and a two-run double by Rodriguez to push the Phillies lead out to 10-1.
Arrieta was struggling some, but keeping the Marlins off the scoreboard – until the top of the 6th inning. The Fish put up a four-spot in that frame, driving the Phillies starter from the game and cutting the lead down to 10-5. The big blow was a two-out, two-run double off the bat of Granderson that got away from McCutchen in center field.
With both starting pitchers out of the game the final few innings would be in the hands of the two bullpens. The Marlins would get to the Phillies pen in the top of the 7th to cut into the lead some more.
Enyel De Los Santos, who was called up earlier this week after a successful start to the season in the Triple-A Lehigh Valley rotation, was victimized by a two-run homer from Alfaro to make it 10-7. Alfaro now has mulitple hits in all five games that he has played this season against his former team.
In the top of the 8th, Phillies manager Gabe Kapler turned to Seranthony Dominguez. The Marlins just kept coming. Rosell Herrera and Neil Walker each singled, one of which could easily have been an error on Hernandez. Granderson then grounded out 1-3 on a ball that Hoskins nearly made an error on, but recovered in time to nip the speedy Granderson with a pitch to Dominguez covering.
With runners at second and third, a Rojas ground out scored one run and an RBI single by Brian Anderson another, and suddenly the Marlins had trimmed the once comfortable 10-1 Phillies cushion down to a 10-9 nail-biter.
In the bottom of the 8th inning with the game now a nervous tightrope walk, Rhys Hoskins decided to play hero. With Rodriguez aboard on a leadoff walk, Hoskins blasted a no-doubt two-run home run out to left field, pushing the Phillies lead out to 12-9. 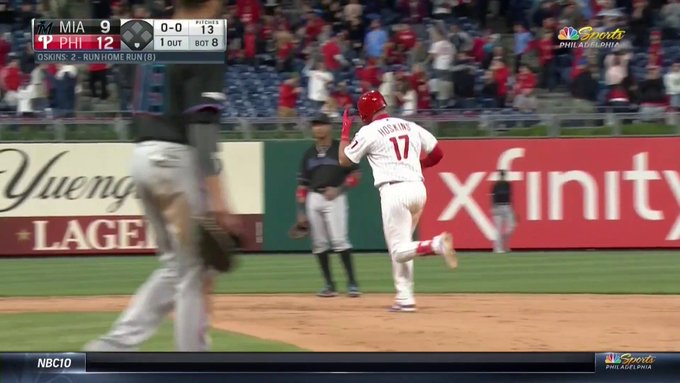 He ran the bases a little faster this time.

Hoskins with the insurance runs!

98 people are talking about this
Twitter Ads info and privacy
For the 9th inning, Kapler turned to Hector Neris to try and close it out. Neris allowed a one-out single and a two-out walk, bringing Chad Wallach to the plate as the tying run for the Fish. Neris buckled down and struck Wallach out swinging on a nasty splitter and the Phillies had a 12-9 victory.

The Phillies first baseman went 2-4 and his eighth inning, two-run homer off Drew Steckenrider, his eighth of the season, gave the club some breathing room when it needed it most.