The Philadelphia Phillies (13-11) avoided a sweep at the hands of the New York Mets (13-11) with a 6-0 victory on Wednesday night at Citi Field in the series finale. The two National League East Division rivals will not see one another again until late June.

Veteran left-hander Jason Vargas started on the mound for New York and had not pitched well here in the early going of the 2019 season. The Phillies hoped to jump him early and did just that, scoring a run in the top of the 1st inning. However, it was also a missed opportunity as it could have been more.
With one out, J.T. Realmuto and Bryce Harper laced back-to-back doubles. Realmuto’s split the gap in right-center field and went to the wall. Harper’s went to the right field corner, scoring Realmuto with the game’s first run. When Rhys Hoskins worked a full-count walk the Phillies appeared to be in business against Vargas.
However, both Maikel Franco and Cesar Hernandez helped out the struggling Mets hurler, swinging at first pitch offerings. Franco nearly dropped one into short right field, but Michael Conforto saved Vargas a ton of trouble with a fine running, sliding grab. Hernandez then grounded into a force to end the threat.
The early innings moved along slowly after that, with both Vargas and Phillies starter Vince Velasquez wriggling their way out of repeated trouble. The Phillies left runners in scoring position with less than two outs in both the 1st and 2nd innings, then put the leadoff man on in the top of the 3rd but could not get him home. The Mets left the bases loaded in both the 1st and 3rd innings.
Velasquez hit veteran Todd Frazier to lead off the home 4th inning, prompting a warning to both dugouts after Tuesday night’s excitement. Frazier would eventually reach second base, but was stranded in scoring position. With one out in the top of the 5th, Vargas hit Realmuto and was not tossed. It was fairly obvious that it wasn’t intentional, but then so was the Velasquez pitch to Frazier.
Mets manager Mickey Callaway lifted Vargas after he struck out Harper in the top of the 5th inning, bringing on right-hander Seth Lugo, who coaxed Hoskins to sky out to center field as the Phillies again left a runner in scoring position with less than two outs. Lugo would keep it a 1-0 game until two out in the 7th inning, and lefty Daniel Zamora ensured it would remain that way.
Velasquez lasted through 5 innings before Kapler lifted him for a pinch-hitter in the top of the 6th. He would be followed to the mound by Pat Neshek, Seranthony Dominguez, and Adam Morgan each tossing a shutout frame apiece.

In the top of the 8th inning the Phillies would finally break through to extend their lead. Hoskins led off by lining an opposite-field triple that Conforto dove for but could not reach. Maikel Franco followed with a base hit to score Hoskins and up the lead to 2-0.
After Hernandez also singled, Sean Rodriguez bunted the two runners over to second and third. Phil Gosselin then came through as a pinch-hitter for Dominguez, singling to score Franco and make it a 3-0 game. Roman Quinn then rolled a perfect bunt single with Hernandez racing home to score the run that made it a 4-0 lead.
The Phillies took that 4-0 lead into the top of the 9th inning, and then came the sweet revenge of Rhys Hoskins. 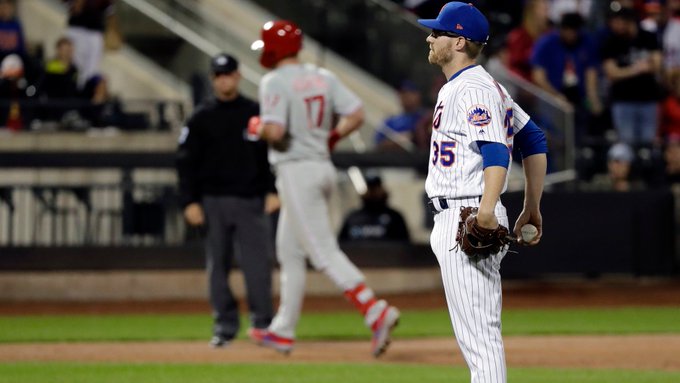 Lovely night for a stroll …

1,953 people are talking about this
Twitter Ads info and privacy
The Phillies and Hoskins exacted some sweet revenge with the first baseman facing the man who threw at his head twice the prior night. Hoskins drove a two-run homer over the wall in left field to give the Phillies a final margin of 6-0. To punctuate his feelings, Hoskins took about a year-and-a-half (only slight exaggeration) to round the bases. Juan Nicasio came on to close it out with a 1-2-3 bottom of the 9th, and the Phillies avoided the sweep in the Big Apple.