J.T. Realmuto enjoyed a big night in blowout of Mets

The Philadelphia Phillies (10 – 6) needed to make an early-season statement in a bad way. They wasted no time doing just that, erupting for 10 runs in the 1st inning and trouncing the division-rival New York Mets (10 – 7) by a score of 14-3 on Tuesday night at Citizens Bank Park.

New York fans had rolled down I-95, encouraged by their club’s exta-innings victory in the opening game of this series. They hoped to chant “Let’s Go, Mets!” and frustrate Phillies fans once again. Instead they were left to sit on their hands before leaving early.
Jerad Eickhoff, who missed most of last season while battling injuries, came out of the bullpen to provide four shutout innings and steal the thunder provided by the big bats.
Let’s go over the highlights of that huge first inning for the Phillies. Andrew McCutchen started it off, reaching on an error by Mets shortstop Amed Rosario. Jean Segura then slashed a double to left field to put two runners in scoring position. Bryce Harper was then drilled on the hand to load the bases. Harper shook off the hand and stayed in the game, appearing fine as the night moved along.
J.T. Realmuto then ripped a two-run double to put the Phillies on top by 2-0. Scott Kingery, getting the start at third base, followed by blasting a three-run homer to left. Kingery’s first long ball of the year pushed the Phillies out to a 5-0 lead.
After Cesar Hernandez walked, Aaron Altherr rolled a ball to Rosario, who let it roll through his legs for his second error of the inning. With two runners on base, Maikel Franco sent a blast out to deep center field for his sixth home run of the season and the Phillies led by 8-0.
That was enough of starting pitcher Steven Matz for Mets manager Mickey Callaway, who sent to his bullpen for Drew Gagnon. The 28-year-old righty was just called up today from Triple-A Syracuse. Gagnon struck out Pivetta for the first out, but then McCutchen doubled. Segura then grounded out with McCutchen moving up to third.
Bryce Harper walked to put runners at the corners. Realmuto then sent one to left, where an error by Jeff McNeil sealed that this would not be the visitor’s night. That big miscue by the man who was the hero of last night’s contest for the Mets allowed two runs to score making it a 10-0 Phillies lead.

The Mets got on the board with single runs in the 2nd and 3rd innings against Nick Pivetta, both on solo home runs. The first came off the bat of former Phillies catcher Wilson Ramos, his first of the year. The second came from Michael Conforto, his fourth of the season and second in two nights.
Pivetta escaped some trouble in both the 1st and 4th innings and had to be thankful for the offensive support on a night when the Phillies right-hander once again did not look strong. That offensive support continued in the home 4th when Realmuto crushed his second home run of the season into the center field stands. It was the catcher’s third hit of the night and gave him five RBI. 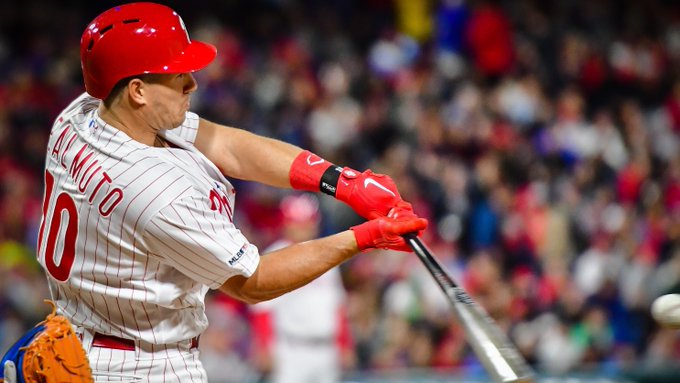 329 people are talking about this
Twitter Ads info and privacy
The Mets loaded the bases again off Pivetta in the top of the 5th inning. Once again, Pivetta escaped major damage, allowing just a sacrifice fly to Ramos to cut the Phillies lead down to 11-3. That 5th inning was also the final frame for the Phillies starter, who had reached the 100-pitch mark.
When manager Gabe Kapler made the call to the bullpen for the top of the 6th inning it was to bring in Eickhoff. It would be the first appearance of the season for the 28-year-old, and it was possibly going to serve as an audition for a possible change to the starting rotation.
In the home 6th, the offense continued to produce. Harper lined a single to right field to start it off. Realmuto then chopped one to third that J.D. Davis tried to short-hop but couldn’t come up with, and his error put two men on base. They weren’t on base for long as Kingery doubled them both home to up the Phillies lead to 13-3. Kingery then scored himself when Hernandez also doubled.
When Kapler let Eickhoff bat for himself to lead off the home 7th it was pretty clear that he was auditioning for a larger role. It would prove a magnificent outing as the righty went four shutout innings, allowing three hits while walking no one and striking out six. He would end the game in dominant fashion, striking out the side in a 1-2-3 final frame.
The 14 runs scored was a season high for the Phillies, while their 13 hits was one shy of that season-high figure. With the win in front of a sellout crowd of 43,933 the Phillies moved past the Mets and back into first place in the National League East Division. 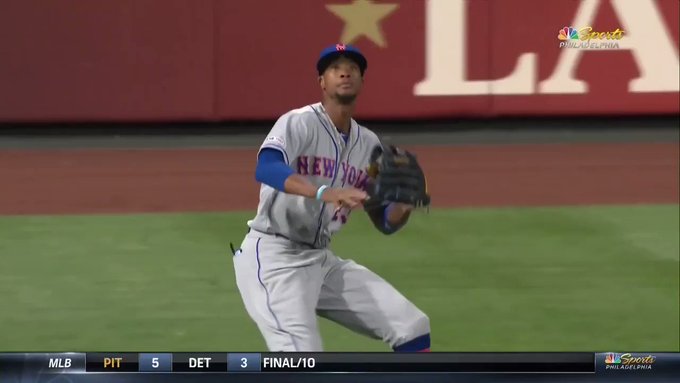 If we had six seconds or less to show you how tonight’s game has gone for the Mets.

We’d show you this.

Neither starting pitcher was very good tonight. The difference was that Matz was an unmitigated disaster while Pivetta was simply not very good.
Matz did not record an out and was gone after just 31 pitches in the 1st inning. Before leaving he surrendered four hits including a pair of home runs while walking a batter. It all resulted in eight Phillies runs, six of them earned.
Pivetta allowed three earned on seven hits including two homers. He struck out two and walked three, throwing just 59 strikes among his 100 pitches.

On a night when the offense put up 14 runs, it was a relief pitcher who stole the show for the Phillies. Eickhoff’s performance served to keep the Mets from making any kind of move in this game. He also provided hope that, after missing most of last season, he may be ready to step in and provide a needed quality arm to help settle down what has been a somewhat shaky Phillies starting rotation.
Realmuto had three hits including a homer, three runs scored, and five RBI. Kingery had three hits including a homer and also drove in five runs while scoring twice. If we gave out 2nd and 3rd stars, they would be the recipients. But we don’t do that, so forget that I said anything.