Nick Williams and the Phillies 2019 bench have not produced early

This is no “woe is us” tale, nor will it be a “the sky is falling” story about how it is all going to come crashing down on the National League East Division-leading Philadelphia Phillies.

But as I pointed out in my Monday piece on three looming lineup and roster issues, the team’s bench players have not been producing to this point.
Over the first nine games, manager Gabe Kapler has used the exact same starting lineup of position players seven times. He gave catcher J.T. Realmuto a rest last Saturday with Andrew Knapp getting the start behind the plate. Then in Monday’s series opener against the Nationals, Kapler started Scott Kingery over Cesar Hernandez at second base.
Nick Williams has been the primary left-handed bat off the bench. He has appeared in eight of the nine games, all as a pinch-hitter. Williams is just 1-8 with the lone hit an RBI single during last Wednesday’s loss in Washington.
Aaron Altherr has appeared in six games, with all of his appearances also as a pinch-hitter. Altherr is off to a 1-6 start and contributed an RBI single during last Friday’s victory over Minnesota.
Kingery registered his first two hits of the season in Monday’s starting opportunity. Prior to that he was 1-4 while coming off the bench with a walk and a run scored. Three of his four previous appearances had come as a pinch-hitter. He also came in as part of a double-switch, replacing Hernandez during the loss in D.C. last week. 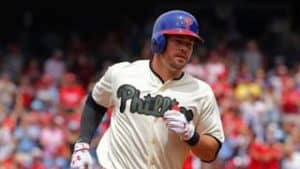 Andrew Knapp received one start behind the plate and is going to be counted on to spell J.T. Realmuto a couple of dozen times.
Knapp was just 0-2 in a pair of pinch-hitting appearances prior to his lone start in which he went 1-2 this past weekend. In that game, Realmuto came on as a pinch-hitter and stayed in to catch, going 0-2. Hernandez did not see action in Monday’s game.
So with the single starts for both Kingery and Knapp out of the equation and Realmuto’s relief effort factored in, the Phillies bench has been a collective 3-22 for a collective .136 batting average, two RBI, and one run scored. They have no extra-base hits to this point.
There is hope that the dynamic Roman Quinn will be able to return from his latest injury in the coming days. But even with his addition the bench may require some upgrading if the Phillies truly hope to extend their hot start over a full season of contention.

Having an experienced bench group can be extremely important to a team with deep October aspirations. Think back to the players who came off the bench for Charlie Manuel in 2008. 33-year-old outfielder Geoff Jenkins in his 11th big-league season. 30-year-old Greg Dobbs in his fifth season. 30-year-old Eric Bruntlett in his 6th season.
When that club needed even more help later in the year they reached out and brought in 40-year-old, 16-year veteran slugger Matt Stairs for some extra pop down the stretch during the crucible of September baseball and then through the postseason.
The backup catcher that year was the famous “33-year-old rookie”, Chris Coste. He was then 35 and in his third season. Together these five leading members of the bench group provided 31 homers and 125 RBI to that team.
The Phillies current starting lineup matches up well when compared to the 2008 World Series champion Phillies. But in a comparison of the two bench groups, there is no comparison.
Williams is a talented ballplayer who could still prove to be a big-league regular. At just age 25, he is probably best served, both for himself and his value to the team should an injury strike a starter, by playing everyday with Triple-A Lehigh Valley. That is the move which I recommended the club make when Quinn does return.

No matter what general manager Matt Klentak and the rest of the Phillies brain trust decides to do with the Williams, Altherr, and Quinn decision that is looming, the broader issue of an unproductive and largely inexperienced bench could end up determing just how far this 2019 Phillies team can go.