First lineup changes of the season for Phillies as J.T. Realmuto gets a rest

It’s one of the most commonly used and recognized phrases in the English language, understandable to anyone who hears it uttered: if it ain’t broke, don’t fix it.

Phillies manager Gabe Kapler has lived by that mantra over the first week of the 2019 Major League Baseball season. For the first six games the skipper has run out the exact same starting lineup. The Phillies have responded with a 5-1 record, with an average of 8.2 runs scored per game.
But it was only a matter of time before an injury or the need to give someone a blow would necessitate a change, and that first starting lineup comes today. It’s a fairly subtle change, however, one that should not be unexpected.
Kapler’s lineup for Saturday afternoon’s Interleague game against the visiting Minnesota Twins at Citizens Bank Park will see Andrew Knapp receiving his first start of the year behind the plate. That gives starting catcher J.T. Realmuto a needed break for a day game following a night game.
In order to keep the best all-around catcher in the game today fully healthy over the course of a long six-month season, Kapler is going to need to pick and choose these types of opportunities to give his starting backstop a rest. Fans should expect that Realmuto is going to get a couple of dozen of these breaks over the course of the year, or about once per week. 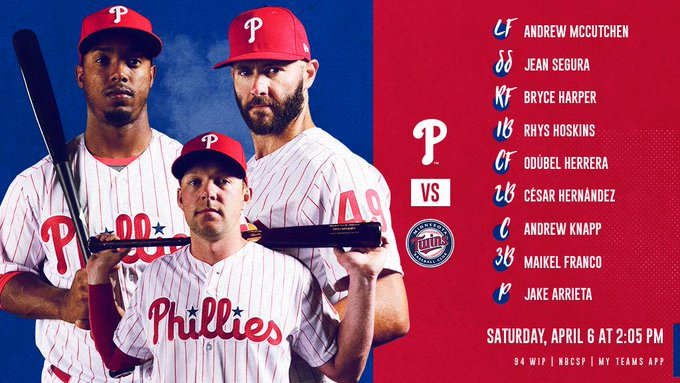 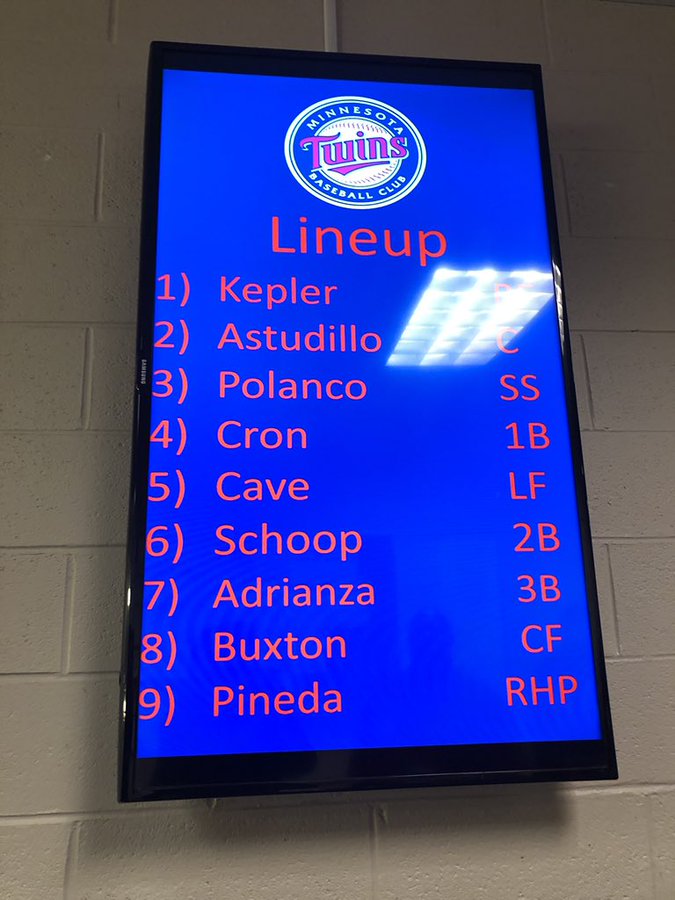 Byron Buxton is back in the Twins’ lineup:

See Betsy Helfand’s other Tweets
Twitter Ads info and privacy
Kapler is making just a minor change from his first six games. Realmuto gets the break behind the plater with Knapp getting the start and hitting seventh. That bumps both Odubel Herrera and Cesar Hernandez up one slot in the batting order to bat in the 5-6 spots respectively.
Twins skipper Rocco Baldelli is making a number of changes from his Friday night lineup. Exciting center fielder Byron Buxton is back after missing the last two games after bruising his ribs running into a wall this past Tuesday. Buxton has game-changing speed and is a Gold Glove-caliber defender in the middle of the outfield.
Former Phillies prospect Willians Astudillo is behind the plate and batting second. He is off to a hot start for Minnesota with three doubles, three RBI, six hits and five runs scored over his first dozen plate appearances of the 2019 season.
Jorge Polanco, who hit for ‘The Cycle’ last night when he produced a five-hit game, drops to the three-hole in place of Eddie Rosario, who is getting the day off. Ehire Adrianza gets the start at third base with Marwin Gonzalezgetting the day off as well.
Joining Gonzalez and Rosario on the bench is slugger Nelson Cruz. The Twins regular DH has still not played the field at all this season. While the moves take some pop out of the Minnesota starting lineup the late-game bench options are very attractive for Baldelli, if his team can keep the game close enough for that to matter.