Today is one that fans of the Philadelphia Phillies have been looking forward to for the last nine days. On February 28 the announcement spread like wildfire across the baseball landscape when free agent Bryce Harper agreed to a deal with the club. Since that time the fans have enjoyed a series of firsts.
One week ago today on top of the home dugout at Spectrum Field in Clearwater, Florida they got to see their new hero don the red Phillies cap and pinstriped jersey for the first time. They got to listen as the 26-year-old superstar said all the right things in looking forward to spending the next 13 years trying to bring them championships.
The following day they got to see him stride out from the home locker room and enjoy a practice under that warm Florida sun with his new teammates for the first time. Stretching, running sprints, taking batting practice
As this past week rolled along the new right fielder began to face live pitching, first from minor leaguers and then from some of the big-league staff, including Jerad Eickhoff.
Harper has looked good thus far. He is obviously in great physical shape. But now it is time for him to truly begin getting into baseball shape. That will require him seeing pitches from opposing hurlers who are trying to get him out. That process began on Saturday afternoon.
Appearing in a Phillies uniform during an actual game for the first time, Harper was inserted by manager Gabe Kapler into the #3 spot in the starting lineup in front of the home fans for the Grapefruit League game at Clearwater on Saturday, March 9 against the visiting Toronto Blue Jays.
View image on Twitter 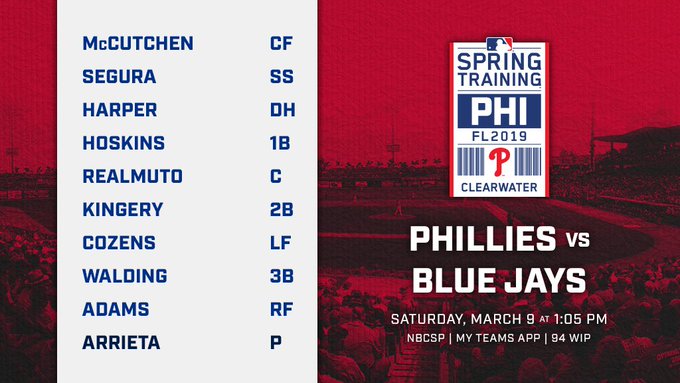 917 people are talking about this
Twitter Ads info and privacy
Kapler was as excited as the fans to see his new young stud in game action. The second-year Phillies skipper was quoted on Friday by Todd Zolecki at MLB.com:
“Before anything else, we are fans of the sport and fans of talent. I’m just excited to see him in his first game action. He’s been so focused in what appears to be low-pressure situations. There’s one other guy who I’ve seen take things so seriously, like a live batting practice session on a backfield against Minor League pitching, and that’s Clayton Kershaw…Kershaw will go down on a rehab assignment and he’s pitching in that contest like it’s Game 7 of the World Series. No lack of intensity, same focus. Bryce is kind of similarly wired. I’m excited to see what he looks like in his first Spring Training game.”
Harper stepped to the plate for the first time against Jays’ right-hander Matt Shoemaker. The 32-year-old is preparing for his first season in Toronto after being a member of the Los Angeles Angels rotation for the last five years.
After swinging through the first pitch that he saw, Harper worked a five-pitch walk. That was followed immediately by a massive two-run homer over the left field Tiki Bar off the bat of first baseman Rhys Hoskins for a 2-0 Phillies lead.
Harper came up again in the bottom of the third inning with two outs, nobody on base, and the Phillies trailing 7-2. Once again he worked a walk, showing that he is picking up pitches well. On reaching first base, Harper was immediately replaced by Adam Haseley as a pinch-runner.

Harper enjoyed his first practice session with the Phillies on March 3.
The next step is scheduled to come on Monday against Tampa Bay in Clearwater when Harper could see three plate appearances for the first time.
Assuming there are no physical or weather issues, Harper will take his spot out in right field, which reportedly will happen on Monday vs the Rays in Clearwater.
It is all part of the process in getting him ready for the regular season Opening Day on March 28 at Citizens Bank Park against the defending division champion Atlanta Braves.
Earlier in the week, Scott Lauber at Philly.com quoted Harper on that process: “If I’m at 40-45, that’s huge for me. If I’m under that, it’s OK. But it’s trying to see pitches, trying to see as many at-bats as I can.”
With just 16 games left down in Florida counting today, and assuming that he is likely to play in about a dozen of those games, Harper will need to average about 3.5 plate appearances in each outing. Again assuming he remains healthy and the weather generally cooperates, that should prove doable.
Originally published at Phillies Nation as “Bryce Harper appears in his first game with the Phillies“