The Philadelphia Phillies and at least a handful of other Major League Baseball organizations have been doing a dance all off-season for the two biggest free agent names on the market.

Everyone who follows baseball – anyone who really follows sports at all for that matter – has been well aware that Bryce Harper and Manny Machado are those two big names.
The two 26-year-olds hit the open market together in a situation that had most MLB clubs salivating, plotting, and planning for at least a couple of years. The Phillies were perhaps more financially prepared for this off-season than any other team.
And after making moves to sign Andrew McCutchen and David Robertson as free agents and bring in Jean Segura, J.T. Realmuto, Juan Nicasio and Jose Alvarez via trades the Phillies are roughly $37.5 million below the Competitive Balance Tax threshold for the 2019 season.
For the 2020 season the Phillies can get out from under the contract of Cesar Hernandez and a handful of relief pitchers. They currently project at more than $113 million below that CBT threshold for next season per Cot’s Baseball Contracts.
In short, the Phillies are getting a little bit tight for this upcoming 2019 season if they indeed wish to remain below the CBT. That is assuming they don’t swing a couple of deals to give them a bit more room at some point. However, things really could open up after this year.
Perhaps the most respected MLB insider around, Ken Rosenthal at The Athletic, wrote the following today regarding the Harper and Machado situations:

“Harper’s agent, Scott Boras, and Machado’s agent, Dan Lozano, both are believed to be seeking at least $300 million.” ~ Ken Rosenthal

“Neither wants to sign first, knowing once one of the players goes off the board, the other will benefit from gaining the sole attention of the remaining suitors.”
Rosenthal went on to particularly address the position of the front office down at Citizens Bank Park, writing that the Phillies: “sitting on “stupid money,” figure they will get one of the two stars, knowing they can top any offer.”
This is pretty much the same story that has been floating around for at least weeks now. But things are indeed beginning to change. The Phillies signing of top reliever David Robertson a month ago and then yesterday’s trade for J.T. Realmuto have signaled that they are “all in” to win immediately.
On Friday morning, Rosenthal had Phillies manager Gabe Kapler on the phone from Clearwater, where the skipper is preparing for next week’s official opening of spring training camp. Rosenthal asked Kapler “If you could address Bryce and Manny right now, what would you say about the 2019 Phillies?”
Kapler responded partially as follows: “I think that the move Matt (Klentak) made on our behalf (the Realmuto trade) was a clear indication that we are in win-right-now mode, and that we are going to push our chips in. And so rather than address Bryce and Manny, I put myself in the shoes of a player. When I see an organization, when I see a club, make that kind of a commitment, I want to be a part of it.”
Kapler went on to talk about the talent and character that Realmuto, McCutchen, and Robertson specifically have added to the Phillies clubhouse and roster, saying “I think we all want to come to work every day with high quality individuals.” 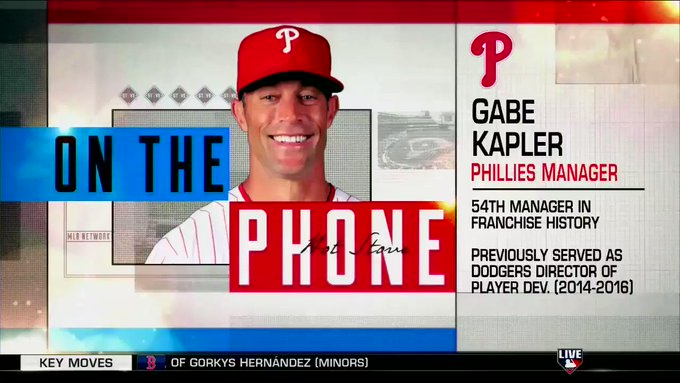 “The move is a clear indication that we’re in win-right-now mode and we’re going to push our chips in.” – @Phillies skipper @gabekapler on the addition of J.T. Realmuto #MLBNHotStove

122 people are talking about this
Twitter Ads info and privacy
Klentak’s best series of moves by far in his tenure has pushed their talent level to the point where the recently-released Baseball Prospectus PECOTA rankings place them as an 86-win team. That is tied for fifth-best in the National League overall, and just three wins behind the NL East favored Washington Nationals.
With their moves thus far, the Phillies have drawn significantly closer to becoming a truly contending team. And now it is finally time to nail down that final piece to the contending puzzle. The signing of either Harper or Machado would make the Phillies division favorites and place them as likely second-ranked in the entire NL to only the defending NL champion Los Angeles Dodgers.
I began a Twitter poll this morning, asking Phillies fans who their preference would be if they could only sign one of the two talented youngsters. The results are not even close. With nearly 1,600 fan votes cast already, Harper is the choice of 90% of those voters.
I believe that the message is clear from Phillies Nation to Klentak and principal owner John Middleton. If you are truly pushing your chips all-in, then the time is now to nail down one man, Bryce Harper, and put him in red pinstripes.
It is time to do what it takes to blow the other contenders out of the water, and to get Boras to recommend his client sign a long-term deal. It is time for the Phillies to truly fire up their fan base, to step up and get it done.
Originally published at Phillies Nation as “Time for Phillies to step up and nail down Bryce Harper“