Ballots for nominees to the 2019 Baseball Hall of Fame class were received this past week by eligible voters with the Baseball Writers Association of America.

There are 35 players on the ballot this year. That total includes 15 holdovers from last year’s ballot and 20 newcomers. Among those nominees there are nine who played with the Phillies at one time or another.
Three returning Phillies players on the BBWAA ballot this year are Curt Schilling, Billy Wagner and Scott Rolen.
Schilling spent most of his Phillies career from 1992-2000 as a starter, including as the ace of the 1993 NL pennant-winning squad. Wagner was a lights-out closer for the Phillies during the 2004-05 campaigns. Rolen was the 1997 NL Rookie of the Year and four-time Gold Glove third baseman during his 1996-2002 Phillies years.
The half-dozen newcomers to the BBWAA Hall of Fame ballot for 2019 are pitchers Roy Halladay, Roy Oswalt, and Freddy Garcia. Infielders Placido Polanco and Michael Young and outfielder Juan Pierre also spent time with the Phillies and are on the ballot this year as position players.

PHILLIES NEWCOMERS TO THE BALLOT

Garcia (34.4 WAR), Young (21.4) and Pierre (17.1) are very likely to fall off the ballot after this round of voting. Any player who does not receive support from at least 5% of the voters is removed from the ballot, and it is hard to imagine either player reaching that mark. Oswalt and Polanco each have a chance to receive at least enough support to remain on the ballot for a second year.
Oswalt was part of the 2011 ‘Four Aces’ starting pitching rotation that led those Phillies to a franchise-record 102 regular season victories. The righty had come over from Houston at the 2010 non-waiver trade deadline following a strong decade with the Astros during which he was a three-time NL All-Star and finished among the top five in NL Cy Young Award five times.
Over a 13-year career in Major League Baseball with three organizations, Oswalt went 163-102 with a 3.36 ERA and 1.211 WHIP. He registered an excellent 3.56 K:BB and accumulated a 50 career WAR mark.
Polanco was obtained in a 2002 trade with the Saint Louis Cardinals for Rolen. He would start at second base for the Phillies from 2002 until being traded to the Detroit Tigers during the 2005 season, making way for Chase Utley to take over the position.
With the Tigers, Polanco became an AL All-Star and won two Gold Gloves and a Silver Slugger. He was named the Most Valuable Player of the 2007 ALCS and received AL MVP votes in both 2007 and 2009.
Polanco returned to the Phillies after the 2009 season as a free agent, playing third base from 2010-12. He was a 2011 NL All-Star and captured this third career Gold Glove Award at a second position. Polanco finished with 2,142 hits over 16 big-league seasons with a 41.5 WAR mark.
Halladay has an excellent shot at enshrinement in his first year on the ballot. He accumulated a 64.3 career WAR mark to go along with a 203-105 record, 3.38 ERA, 1.178 WHIP, 3.58 K:BB and a host of signature accomplishments and awards.
The big right-hander was the AL Cy Young Award winner in 2003 with the Toronto Blue Jays and the NL Cy Young Award winner in 2010 with the Phillies. He finished as runner-up for the award with both teams as well.
Halladay was an eight-time All-Star and three-time 20-game winner (won 19 twice) who led his league in innings pitched four times, shutouts four times, and in complete games on seven occasions.
In that 2010 season with the Phillies, Halladay tossed the 21st Perfect Game in MLB history and one of just two postseason no-hitters.

In addition, 10 individuals are being considered for enshrinement by the Today’s Era committee. One of those individuals is Charlie Manuel, manager of the Phillies 2008 World Series championship team.
Manuel skippered the club from 2005-13, compiling an overall 780-636 mark. His Phillies teams won five consecutive NL East crowns from 2007-11, and back-to-back National League pennants in 2008-09.
In addition, Manuel managed the Cleveland Indians from 2000-02, compiling a 220-190 record with a 2001 AL Central crown. Prior to that he was the hitting coach in Cleveland during the Tribe’s 1990’s heyday as a consistent title contender. 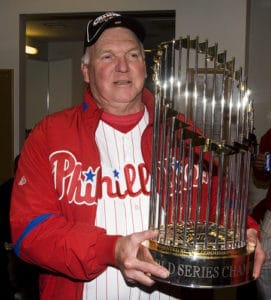 Charlie Manuel is among 10 nominees to the Hall of Fame through the Today’s Era committee. (Photo: (Chris O’Meara/AP)
The other with Phillies ties on that Today’s Era ballot is Davey Johnson, who is being considered due to his work as a manager as well. He managed the 1986 New York Mets to a World Series championship, and his teams finished in first place during six of his 17 seasons.
Johnson won 1,372 games while skipper of five clubs, which puts him 31st on the all-time career list for managerial victories. Only three men ahead of him on that list are deceased. Seven are either still active or are alive and still could be hired to add to their totals. Just one of those deceased and ahead of him, Ralph Houk, had a winning career record.
Johnson’s ties to the Phillies came as a player during the 1977 and 1978 seasons. The Phillies won the second and third of three straight NL East crowns in those years.
Johnson was mostly a late career bench player at that point, but he did receive a number of starts at first base in September of 1977, and also started Game 1 of the 1977 NLCS against the Los Angeles Dodgers. He got a number of starts at third base during August of the 1978 season when future Hall of Famer Mike Schmidt was battling injury.
Johnson had been a three-time American League All-Star and three-time Gold Glover at second base during the early years of his career with the Baltimore Orioles. He slugged 43 home runs during an NL All-Star campaign with the Atlanta Braves in 1973.
Based on his career managerial wins total and his overall career back to his playing days, Johnson certainly has a better chance at enshrinement than Manuel. That despite the latter’s expected far greater popularity in Philadelphia. Still, I don’t see either man making it, at least not this year.

WHICH FORMER PHILLIES MAKE THE HALL OF FAME?

So, who makes it? Which of the 11 individuals with connections to the Philadelphia Phillies franchise is going to gain entry to the Baseball Hall of Fame? My prediction is that three of them will get in – eventually. But I think that each will gain enshrinement at radically different paces.
As I stated earlier, there is a great chance that ‘Doc’ Halladay makes it right away in this, his first year on the ballot. If I were a betting man, I would say that he gets in now. If he doesn’t it will be very close, and he makes it by 2020 at the latest.
Schilling clearly deserves to be in the Hall of Fame. His 79.6 career WAR is fourth among all players on the ballot, trailing just Barry Bonds and Roger Clemens, who are being held up for now only because of suspected PED usage.
He also trails Mike Mussina, the former Orioles and Yankees ace who was named on 63.5% of ballots in his fifth year last time around. That was second only to Edgar Martinez, who should reach enshrinement this time out in his own final year on the ballot.
I believe that Mussina inches closer this year, finishing in the upper-60’s, and then gains entry in either 2020 or 2021. Schilling, who received 51.2% of the vote a year ago, will make it as well, but only after Mussina. He could make it in 2021 or 2022, but may ultimately end up like Martinez, held off by the voters until a final push in his last year on the ballot in 2023. 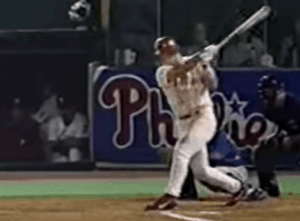 Scott Rolen will eventually be enshrined in the Baseball Hall of Fame, but it may take awhile.
Rolen is a more difficult proposition. He only received support from 10.2% of the voters last year, which was just his second time on the ballot. If he finishes that low again or even, gasp, drops off the ballot entirely it will be an absolute crime.
Rolen is sixth among all players on this ballot in career WAR. His 70.2 mark sandwiches between the Coors Field-spiked numbers of Larry Walker (72.7) and the PED-infused 69.4 mark of Manny Ramirez. He is ahead of Martinez, Halladay, and Mariano Rivera, all of whom are likely to make up the 2019 Hall of Fame class.
Among his 17 seasons in Major League Baseball were four shortened by injury. Three of those came during his prime while with the Saint Louis Cardinals, with whom he was the starting third baseman on their World Series championship squad.
Rolen hit .281 over his career and produced 2,077 hits including 316 home runs. He drove in 1,287 and scored 1,211 runs. His 517 doubles are 52nd among all players in MLB history. Rolen was the 1997 NL Rookie of the Year, a seven-time NL All-Star, and a Silver Slugger Award winner.
In addition to being a consistent middle-of-the order presence in the batting orders of four teams, Rolen was one of the greatest defensive third basemen in baseball history. An eight-time third base Gold Glove Award winner, he trails only Brooks Robinson (16) and Mike Schmidt (10) at the hot corner.
Assuming he can stay on the ballot, I see Rolen’s support slowly and steadily rising. He is eligible to remain on the ballot through much of the next decade, until voting for the 2027 class. Hopefully he eventually reaches 75% of the voters. If not, I believe he still makes it one day through the Veteran’s Committee process.
So there you have it. 11 former Phillies being considered this year. Three of them will ultimately be enshrined in the Baseball Hall of Fame, but only Halladay gets in this year or next. Two more, Schilling and Rolen, will have to wait their turn until sometime in the 2020’s.

Originally published at Phillies Nation as “Which nominated Phillies will be voted into the Baseball Hall of Fame?“