As the 2018 MLB trade deadline was approaching on Tuesday afternoon, the Philadelphia Phillies finalized a deal to acquire nine-year veteran catcher Wilson Ramos from the Tampa Bay Rays.
Jeff Passan of Yahoo Sports first broke the news early on Tuesday afternoon via Twitter that club was “deep into talks” with Tampa regarding the soon-to-be 31-year-old native of Venezuela.
Phillies general manager Matt Klentak and his counter-part with the Rays, Erik Neander, worked to hash out the details as the afternoon rolled along.
As those initial details began to leak, Jonathan Mayo of MLB Pipeline tweeted out that the Phillies would not be surrendering any top prospects.
Ramos is currently on the 10-day disabled list due to a hamstring issue. It was reported last week that Ramos was able to complete catching drills at Tropicana Field on Thursday, and was scheduled to catch a live bullpen session on Saturday.
The injury caused Ramos, voted by fans as the starting catcher on this year’s American League all-star team, to miss the mid-summer classic.

I am told the Phillies will not be giving up a member of their Top 30 prospects list.
MLB Pipeline

#Phillies reportedly acquire Wilson Ramos from the #Rays. Here’s a look at what the @Phillies have to offer in terms of prospects: http://atmlb.com/2FMrrYR 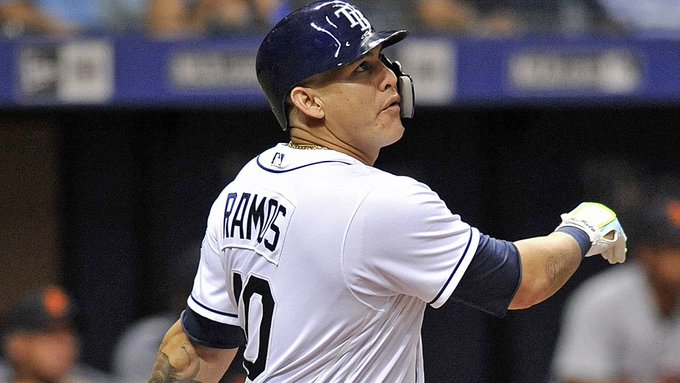 Twitter Ads info and privacy
Klentak later spoke to the press and revealed that the Phillies had acquired Ramos and cash considerations in exchange for a player to be named later and/or further cash considerations.
The GM also revealed that Ramos was not expected to return from the DL until at least mid-August, and might not be available to the Phillies until September 1st.
Ramos was originally signed by the Minnesota Twins as a teenage amateur free agent out of his native Venezuela back in 2006. He broke into the big leagues with Minnesota in 2010, and then was dealt to the Washington Nationals that year at the trade deadline.
With the Nationals, Ramos became a regular for the first time the following season. He finished fourth in the 2011 NL Rookie of the Year voting, then made the NL all-star team in 2016. Ramos also was awarded the NL Silver Slugger Award for catchers at the conclusion of that 2016 campaign.
Unfortunately for Ramos, he also suffered a knee injury late in that 2016 season. The timing was particularly unfortunate, as he was becoming a free agent for the first time.
The Rays took a shot on him anyway, getting Ramos for two years and $12.5 million in what has to be considered a bargain. Ramos will again become a free agent at the conclusion of this current 2018 season.
Per Marc Topkin of the Tampa Bay Times earlier this month, Ramos knows what he lost with the injury, but has moved on:

“It cost me a lot, especially in my free agent year, and I was having a good year. For a moment I felt so bad because I was working so hard to try to make my dreams come true. Just one week before the season was over and everything is gone. It was hard to believe it. But I’m still here. I feel great now. I feel like I’m still fighting for that dream. And I’m still young. I feel good. I feel healthy. That’s all I need to show everybody what I can do.”

Prior to tweaking the hamstring earlier this month while legging out a grounder, Ramos was enjoying his second all-star season, his first in the American League. He has a .297/.346/.488 slash line with 14 home runs and 53 RBI in 315 plate appearances.
Compare those numbers to the two men who have handled the Phillies catching duties to date in the 2018 season. Jorge Alfaro has slashed .254/.305/.398 with seven homers and 23 RBI over 275 plate appearances. Andrew Knapp is slashing .223/.318/.372 with four homers and 15 RBI.
Alfaro has superior overall catching skills to Ramos, including a cannon of an arm. However, both Alfaro and Knapp have been guilty of numerous defensive gaffes, particularly when handling pitches in the dirt or slightly wild.
It will be manager Gabe Kapler‘s call as to how he will handle the starting and bench roles, but Ramos is clearly an offensive upgrade at the backstop postion while not sacrificing too much defensively. It would not be unreasonable to presume that he will become the regular starting catcher in the closing weeks, assuming health.
The interesting decision might come with regards to Alfaro and Knapp. Should Ramos prove ready before by mid-August, one is likely to become the backup with the Phillies, while the other heads to AAA Lehigh Valley to gain necessary regular at-bats with the IronPigs.
Knapp would seem the more logical choice to stay in such a scenario. He seems more suited to a backup role and provides a left-handed bat. Alfaro may still be the catcher of the future, and really should play regularly. Whomever gets sent out, they would be back soon after rosters expand on September 1st.
Originally published by Phillies Nation as “Wilson Ramos brings needed experience to Phillies catching mix“
Advertisements