In Hall of Fame acceptance speech, Thome thanks Manuel, recalls time with Phillies

When the time came this afternoon for Jim Thome‘s turn to be formally inducted into the Baseball Hall of Fame, it was no surprise to learn that it would his mentor, friend, and former manager Charlie Manuel who would be doing the introductions.

By way of a pre-recorded video, the now 74-year-old former skipper heaped praise on the man whom he managed with both the Cleveland Indians and the Phillies.
“Every time he walked up to the plate he was dangerous,” began Manuel. The two are both Phillies Wall of Famers. Now the pupil has surpassed the teacher and reached the pinnacle of individual achievement in his profession.
Manuel went on to recall the circumstances when they first met, and the characteristics that attracted him to the young power hitter.

“As far as meeting him the first time, I wanta say it was in spring of ’89. Jimmy was young. He was shy. He was really tentative about what he did, ya know. He wanted to do the right thing. Jimmy was one of the most dedicated guys as far as listenin’. And coachable? I tell people all the time, with Jimmy Thome, he really thinks that you helped him. But Jimmy Thome helped me too. You know, just bein’ who he was, and bein’ dedicated like he was.” 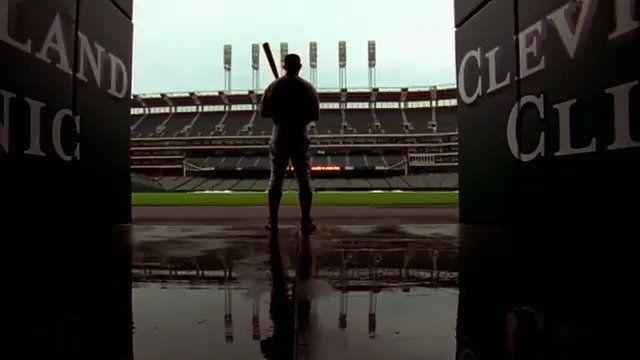 “He hit so much, I don’t think I can explain to you how much he hit.”

Manager Charlie Manuel reflects on the career of #MLBNetwork‘s own Jim Thome, ahead of his #HOFWKND speech.

Twitter Ads info and privacy
There has clearly always been a special bond between the two men. In Cleveland, Manuel was the hitting coach as the Indians won the AL Central Division crown in each of Thome’s first five full seasons from 1995-99.
Manuel would become the manager of the Indians in 2000 but was fired in July of 2002 over a contract dispute. Thome would leave as a free agent that following off-season, signing with the Phillies.
In 2005, the two men would experience an all-too-short reunion when Manuel was hired as the Phillies new skipper. However, Thome would suffer through an injury-marred first half. By June 30, his season was over. Into the breach would stop a new slugger, Ryan Howard, who would win the NL Rookie of the Year Award that season. Thome’s days in Philly were numbered.
Following that 2005 campaign, Thome was traded to the Chicago White Sox for Aaron Rowand and two pitchers, one of whom would be Gio Gonzalez.
Manuel would go on to guide the Phillies to five consecutive NL East crowns, back-to-back National League pennants, and the 2008 World Series championship.
View image on Twitter 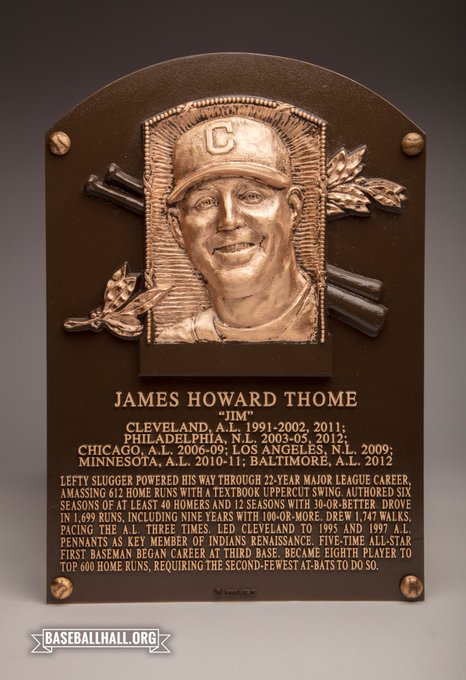 A first look at the Jim Thome Hall of Fame plaque.

In his acceptance speech, Thome remembered

“When I was writing my speech, I was overwhelmed as I reflected on the number of people who have helped shape my career. The first person will come as no surprise. From the moment I met Charlie Manuel as a wide-eyed kid in the Gulf Coast League, I knew this was someone I could connect with instantly. Charlie took a scrappy young kid who was anxious to hit a million home runs, and actually encouraged those dreams. He told me that I could hit as many home runs as I wanted to. From day one in that dugout in Kissimmee, he always believed in me. Chuck, I’ll never forget the day you called me into your office in Scranton. You had this idea that I could benefit from what Roy Hobbs was doing. Little did I know, that day in Pennsylvania would change everything for me. From that day on, all we did was work, work, and work some more.”

Thome’s voice then began to crack and tremble perceptibly as he finished his thanks to his mentor. “You know that I wouldn’t be standing here today without you. Thank you for everything.”
Thome then pointed a finger at Manuel adding “But most of all, thank you for your loyalty.” The skipper returned the gesture with a nod, clearly emotional behind dark black sunglasses.
After Thome had recounted his days in Cleveland, he quickly moved to his time in Philadelphia.

“Cleveland is where my career was born, but Philadelphia is where I had to grow up fast. I needed every single tool in my toolbox in Philly. The city welcomed me with open arms from the moment the electricians met us, wearing our hard hats. The fans couldn’t have been better. Larry Bowa was the manager and he was tough as nails. He pushed me and our team to a whole new level. Thanks Bo, and the front office in Philly, first class all the way. David Montgomery, Bill Giles, alongside of Ed Wade and Ruben Amaro Jr. They made my time there so meaningful.”

Thome also gave a special shout out to former Phillies trainer Jeff Cooper for a program that helped Thome manage a recurring back problem.
There was a large contingent of Phillies fans on hand in the crowd, an acknowledgment that his affection for the City of Brotherly Love is fully reciprocated.
Jim Thome is a class act, and he demonstrated that again today at Cooperstown. His special relationship with both Manuel and the Phillies organization was on full display as he joined the pantheon of the game’s greats.