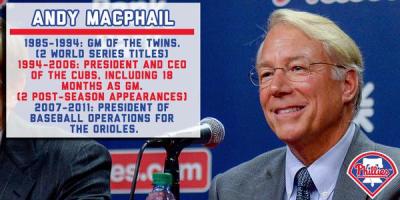 At an afternoon press conference, the Philadelphia Phillies officially announced that longtime baseball executive Andy MacPhail will take over as the President of the club.
MacPhail will take over formally from current President Pat Gillick at the conclusion of the 2015 regular season.
This marks the first time in the 132+ year history of the franchise that the club has hired someone from outside the organization to this most important position of responsibility for all facets of the operation.
In an email to fans, the team explained the situation in this manner: “As president, MacPhail will oversee the entire organization, both its business and baseball operations. For the remainder of the season, MacPhail will serve as a special assistant to Gillick during which time he will work closely with Gillick and chief operating officer Michael Stiles to become acclimated with the club’s operations and its personnel.“
MacPhail may be new to the Phils, but he is as “inside” and experienced as a baseball insider can possibly get.
The son of former American League President Lee MacPhail and grandson of former baseball executive Larry MacPhail, both of whom are in the Baseball Hall of Fame, he has successfully run Major League Baseball organizations previously.

“I’m confident we’re going to be able to get back. It’s just a question of when and how efficient we can be to make it happen sooner rather than later” ~ MacPhail

For a decade from 1985-94, MacPhail served as the General Manager of the Minnesota Twins, helping build a team that would win a pair of World Series championships during his tenure.
That was followed by a 13-year tenure as the President and CEO of the Chicago Cubs from 1994-2006, including a two year period in 2000-01 during which he also served as the Cubbies GM.
MacPhail then moved on to Baltimore, serving as the Orioles President of Baseball Operations from 2007-11.
The O’s ownership wanted to keep him on, but MacPhail decided to leave the game due to personal issues, including health problems for his father and a desire to travel and experience some of life outside the game.
Another major development today was a very public appearance by John Middleton, a longtime member of the Phillies ownership group, who appeared to quite obviously be taking a first public step forward as the face of club ownership.
“Andy brings an uncommon blend of old-school experience and new-age thinking,” said Middleton. “Old school because he has been building winning teams for over three decades. During his tenure in Baltimore, he greatly expanded the use of statistical analysis in player evaluations. That’s the new-age thinking.“
Middleton also announced that the organization has been building a statistical sabermetrics department, which he stated will be ready to go by September.
This marks a huge leap forward for a franchise that has been criticized within the industry for failing to embrace the new statistical evaluations as a personnel tool.
MacPhail realizes that turning around the fortunes of what was a model organization for a decade before sinking to the depths of baseball over the last couple of seasons will not happen overnight. However, he was unwilling to commit to a time frame for contention, either short or long-term.
“I’m confident we’re going to be able to get back. It’s just a question of when and how efficient we can be to make it happen sooner rather than later,” said MacPhail.
Factually, the announcement was clear and MacPhail reinforced that he will be spending the next three months learning about the Phils operations and educating himself on everything, including player personnel and management.
What that means is that any decisions and actions on important long-term matters that will directly affect MacPhail’s regime, most directly trading of veteran players such as Cole Hamels and Jonathan Papelbon, will be done by the current regime of Gillick and Ruben Amaro.
Certainly in such important transactions, MacPhail will have some input. But he admitted that he will likely only be advising in such matters for the time being. This means that a decision involving both the future of Amaro, and a long-term manager, may wait until the off-season.
For now, Pete Mackanin will continue in his role as the interim manager through the series with the Milwaukee Brewers that begins tonight.
Gillick did not commit to anything involving the manager position beyond the series, and said that some announcement would come from the club later in the week.
With a longterm managerial commitment likely an important part of MacPhail’s new beginning, there would seem to be a strong possibility that Mackanin will finish out this 2015 season as the skipper, assuming that he is willing to take that responsibility. A good organizational soldier, that is a likelihood.
MacPhail has experience, and he is a legitimate outsider, something that the organization has needed.
With Gillick gone and new decision makers apparently in place, both in ownership and running the baseball organization, Phillies fans can begin to see the sun rising on what has been a long night.
The sun still has a little time before it rises, but that rising is closer following today’s developments.
Advertisements