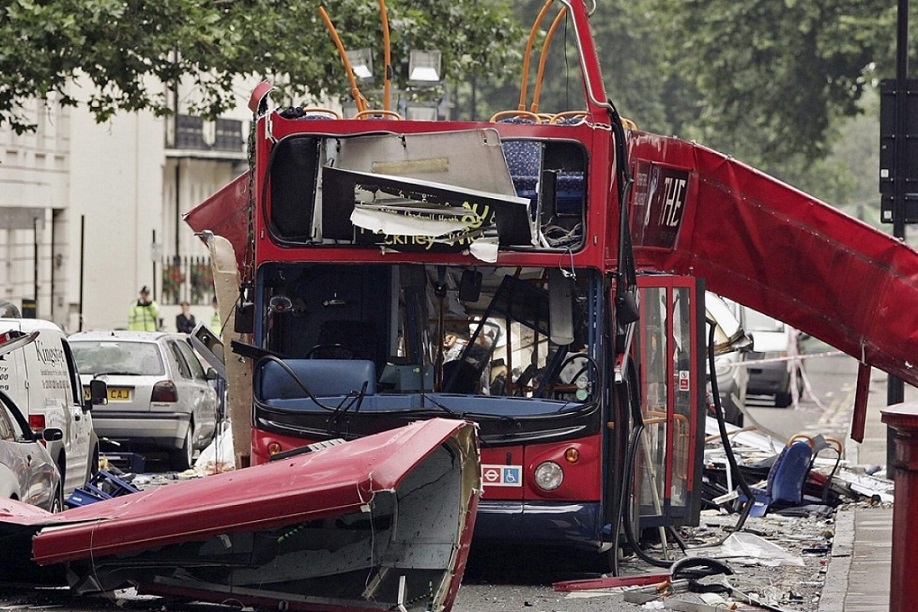 What a difference a day makes. Twenty four little hours.

It was actually less than a day ago when the city of London was awarded the rights to host the 2012 Summer Olympics. The city exploded with joy, and all of England looked forward to their opportunity to shine under the spotlight as the world gathered in the British Isles for the greatest sporting event for the first time in over sixty years.

And then less than twenty four hours later, Londoners were dead and wounded on their buses and in their subway cars, and the Brits were in shock. At least seven different explosions spread over at least four different sites rocked the city as the public transportation system became the target of a coordinated terrorist attack by Muslim extremists during the morning rush hour.

A branch of al-Qaeda operating in Europe has taken responsibility for the blasts, and warns specifically that the Danish and Italian governments, and the governments of all “Crusaders”, must pull their troops out of both Iraq and Afghanistan, or those nations will be next on the terrorists hit list. The group specifically states that the attack is in direct response to, and as retaliation for, the military activity in the Middle East.

The attacks are fresh and new, and the rightful target of our wrath should be those radical Muslim terrorists. Our rightful targets should be al-Qaeda, bin Laden and his agents and supporters. Our rightful thoughts should now be with the British people as they mourn solemnly their many losses, the least of which, as we know well here in America from our own experiences on 9/11, will not be the psychological damage inflicted on a free and open society.

However, there is another group, a group right here at home, that needs to be pointed out and singled out right now, while this latest transgression against humanity is still fresh in our consciousness. That group would be those in the American liberal political movement in general, and the Democratic Party in particular.

For many, many months now, leading liberal Democrats have been berating President Bush over the War on Terror. They have stated that it was an unjustified war, and have called for American troop withdrawals loudly and publicly, the drumbeat of their insistence getting louder and louder, the negativity of their rhetoric getting stronger and stronger, as the weeks have passed.

The liberal mouthpiece, the New York Times, said on June 28th in response to the President’s speech to the nation on the Iraq chapter of the war that Iraq “had nothing whatsoever to do with the terrorist attacks” on 9/11/2001, and that it was wrong for the President to have used those references so strongly in his speech.

This is a theme that the liberals, from Ted Kennedy to Harry Reid, from Hillary Clinton to John Kerry, have been putting forth ad nauseam with speeches at the halls of government and on the airwaves and in the print media. These liberals have been using the fact of many mainstream Americans tiring of the war effort for political capital, trying to paint themselves as moderate, tolerant, and peaceful.

Well, you were wrong Teddy, Hillary, John, Harry, and friends. This is a war, and Iraq has as much to do with it as any other nation. Iraq is not alone. Afghanistan was the first chapter, Iraq the current, but it won’t be the last. The words of the European radical terrorists prove it once and for all, that the 9/11 attacks were a coordinated effort by a real enemy that is bent on destroying our way of life. And now they have struck our friends and allies.

Need still more, Teddy? How about the efforts of Saddam’s regime to recruit bombers to take out Radio Free Europe in the late 90’s?

Need more, Hillary? How about your own husband’s Justice Department in a ’98 indictment against bin Laden that stated “…..al Qaeda would work cooperatively with the Government of Iraq” on projects including weapons development. Not the Bush Justice Department, your husband’s.

Need more, Msrs. Reid and Kerry? How about Saddam harboring ’93 Twin Towers bomber Abdul Rahman Yasin for a decade? Or his statement after the ’98 embassy bombing attacks by al-Qaeda calling bin Laden “an Arab and Islamic hero”? Or Abu Musab Zarqawi choosing Baghdad for surgery in 2002 after being wounded while fighting Americans?

There is so much more. The links between Iraq and al Qaeda, between Hussein and bin Laden, are so clear to anyone who looks with open eyes.

But the eyes of the American left, the liberal Democrats like Kennedy and Clinton and Kerry, remain blinded by an all-consuming hatred of George W. Bush, so much so that they endanger the lives of America’s service men and women by issuing anti-war and anti-administration proclamations on a daily basis that outlets like Al Jazeera use to fan the anti-American flames in the Middle East.

The actions and comments of the American liberal, leftist, Democratic party have been shameful as we try to fight and win a justified War on Terror, a war that they have made even more difficult. Shame on them, and all of their media mouthpieces like the New York Times, Al Franken, and Michael Moore.

The attacks this morning on our good friends and loyal allies over in England once again highlight for us that we are in a real war, one that will not be fought and won over weeks and months, but over years and perhaps even decades. In response to the attacks, President Bush stated with resolve; “We will not yield…we will spread a message of hope and compassion that will overcome their ideology of hate.”

God bless you, Mr. President. And God bless all of our fighting women and men in this most historic struggle. It is the age-old classic struggle of good vs. evil, right vs. wrong, moral vs. immoral. It is really that clear a struggle, and it is long past time for the liberals to set aside their politics and stand up for democracy and freedom for once.

And finally, may God bless the British people as they struggle to come to grips with the war reaching their shores. Here is to hoping that they and all of Europe are prepared to do what needs to be done over the long haul to win this war. Because against this enemy, much as against the fascism of Nazi Germany over a half century ago, nothing short of complete and total victory is acceptable.